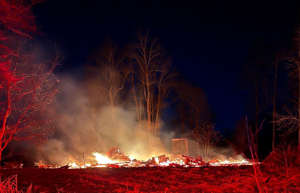 WASHBURN, Tenn. (WATE) – The scent of burned wood and hay is what you’ll smell in the air on Ritter Ridge in Grainger County. Right now, the sheriff’s office is investigating a possible arson after several buildings were destroyed Thursday night.

“My father, my uncle, and another man in the community built this barn by hand and actually my father sawed every piece of lumber by hand for this barn,” Max Ritter said.

For Ritter, it’s a loss of heritage and his family wants justice served to whoever set fire to three of their family barns and a vacant house.

“We realize the fires were started around 9 o’clock last night,” Max’s son, Anthony Ritter, said. “And finally got to bed around 2:30. As far as flames, they were pretty large.”

Several volunteer fire departments responded and fortunately, no animals or people were hurt in the fires.

As the Ritters pick up the pieces, authorities are searching for who is responsible.

Anthony said, “There’s been a report of a strange car in the area,” Anthony said. “It was like a blue Dodge Dakota maybe.”

The fires are very unusual, according to the Ritters, and it’s not the first-time properties have been burned in the area.

“About six or eight months ago there was another barn probably about half a mile from here that got burnt and several others towards the Luttrell community,” Anthony said.

“It stretched from Washburn to Thorn Hill, down through Washburn, and plumb into Luttrell,” Max said. “There was buildings, houses, barns, and everything set on fire.”

“It’s uncalled for. There’s no reason for the fires,” Anthony said. “Nobody is getting anything out of it.”

If you have any information about the suspected arson, contact the Grainger County Sheriff’s Office at (865) 828-3613.

Copyright 2023 Nexstar Media Inc. All rights reserved. This material may not be published, broadcast, rewritten, or redistributed.

For the latest news, weather, sports, and streaming video, head to WATE 6 On Your Side.