Dallas Police are investigating the suspicious death of an endangered vulture found deceased in his habitat at the Dallas Zoo on Saturday morning.

According to officials with the Dallas Zoo, Pin, an endangered lappet-faced vulture, was found deceased in his enclosure at the Wilds of Africa habitat with an apparent wound.

Zoo officials said the wound makes Pin’s death suspicious. Zoo officials declined to go into further details about Pin’s injury but reiterated that the bird’s death did not appear to be naturally occurring. Officials with the zoo said it’s not yet clear when Pin died, but that a necropsy will be conducted to learn more about the circumstances around his death.

Hudson said they’re aware of the possibility that Pin’s injury and the recent damage to habitats could have been done by a zoo employee.

“Everything is under suspect at this point. Internal, external. We’re looking at every single option,” Hudson said.

Pin, who was at least 35 years old, arrived at the Dallas Zoo 33 years ago and his exact hatch date is not known. Pin was one of four lappet-faced vultures at the Dallas Zoo. The birds get their name from the folds of skin, called lappets, on either side of their neck. The three remaining birds, two male and one female, are still in their habitat.

The Dallas Zoo said Pin sired 11 offspring over the last three decades and they now live at Albuquerque BioPark, Zoo Atlanta, Jacksonville Zoo and Gardens, Cincinnati Zoo, and at the Dallas Zoo. Pin’s first “grandkid” hatched in early 2020 and she now lives at the Maryland Zoo in Baltimore. 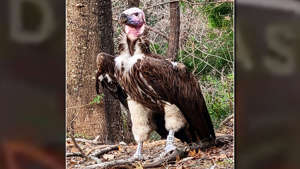 © Provided by NBC Dallas Pin, an endangered lappet-faced vulture, was found dead at the Dallas Zoo. The bird’s death has been described as “suspicious” and the Dallas Police are investigating.

Officials said that given the recent incidents at the Zoo, including reports of damaged enclosures and an escaped clouded leopard, the staff alerted the Dallas Police Department following the vulture’s death.

Dallas Police have not said whether the incident with Pin is connected to the damaged enclosures but that it’s being considered.

A reward of up to $10,000 is being offered for information leading to an arrest and indictment in the case.

The Dallas Zoo shared the following information on lappet-faced vultures.

The birds are native to Africa and parts of the Middle East and with a wingspan of up to nine feet, they are the largest vulture in Africa.

The Dallas Zoo said vultures are often known as “nature’s clean-up crew” and that they play a critical role in consuming dead animals and ridding the environment of the spread of potentially deadly diseases from that carrion.

According to the International Union for Conservation of Nature (IUCN), the birds are considered endangered, with a chance to move to critically endangered. There are likely only about 6,500 of the birds left on earth and they’re considered a small and very rapidly declining population.

These are long-lived birds, which reproduce slowly; usually with only one or two offspring per season.

There are now 27 individual lappet-faced vultures in U.S. zoos, and 41 in Europe and the Middle East.