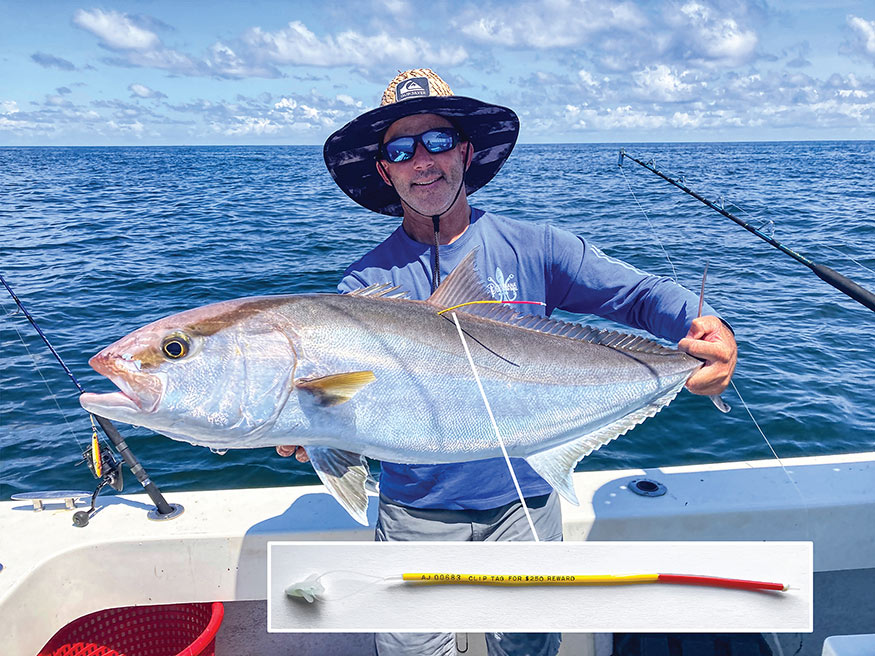 MOBILE, Ala. (CN) — Anglers at this weekend’s 89th annual Alabama Deep Sea Fishing Rodeo — billed as the “largest fishing tournament in the world” — will compete for a wide variety of fish. Prizes are awarded for the largest specimen in more than 30 categories.

Some of the favorites, for both the anglers and the public who gather at a wharf on Dauphin Island to watch the weigh-ins, include tuna, tarpon, snapper, wahoo, swordfish and dolphinfish, better known as mahi mahi. For the first time in seven years, the rodeo – held July 14-17 – ­is also reintroducing sharks to the list of prize-winning categories.

But one species absent from the leaderboards will be the greater amberjack.

Since 2001, the National Oceanic and Atmospheric Administration’s fisheries division has recognized greater amberjack as overfished in the Gulf of Mexico, where the fish has also been the subject of a population rebuilding plan. Two other recognized populations in the South Atlantic Ocean and Caribbean Sea are not overfished, but little else is known about the species, including how the populations interact.

In fiscal year 2020, Congress funded the majority of an $11.7 million study of greater amberjack, with the goal of more accurately estimating the populations, along with their movement patterns and additional biological information.

This summer, a team of 18 scientists from 13 partner institutions will begin wide-scale tagging of greater amberjack and although anglers will miss out on tournament prize money for the species, they are encouraged to collect and submit data on tagged fish they catch for a $250 reward offered by the Greater Amberjack Research Program.

A similar study of red snapper in 2019 determined the abundance of the species to be 2.5 times more than the federal government had previously estimated, and the data from surveys could have significant implications for commercial and recreational fishing and coastal economies supported by those industries, according to NOAA Fisheries.

“Greater amberjack are not as abundant or as popular as red snapper, but it’s an important predator in the system because it also migrates,” said Sean Powers, chair of the marine sciences department at the University of South Alabama and the senior marine scientist at the Dauphin Island Sea Lab. Powers is also serving as the head judge of this weekend’s fishing rodeo.

“Tagging is one part of larger study to determine the absolute abundance of amberjack in the Gulf of Mexico and the South Atlantic,” Powers said. “The idea behind it is to get a large enough survey using the latest technologies to get a baseline of what the abundance is. It will tell us about their movements and fishing mortality levels.”

After tagging, the fish are returned to the location they were caught and signals from the tags are recorded by an array of underwater receivers strategically placed offshore between Texas and South Carolina. The success of the study is largely dependent upon participation from fishermen, who are expected to collect and return the tags along with information such as where and when the fish was caught and its weight and length.

Powers said the red snapper tagging effort yielded a 30% recapture rate in some areas of the study.

“It’s why we make the reward so high is to give anglers a sufficient incentive to ensure all the captured tags are reported and returned,” he said. “Their participation is crucial.”

Dustin Mosely, a resident of Spanish Fort, Alabama, has been fishing the rodeo for 15 years. He doesn’t typically target amberjack, but said he knows they are out there in abundance.

“Everywhere we go within a certain distance out there, they’re thick,” he said.

Mosely uses a rod and reel during the tournament, but in recent years, he’s also become an experienced spearfisherman.

“I’ve dove down and had to literally push through them to get to grouper or other fish, hundreds of them, although a lot of them are younger and in the 20-pound range,” he said.

Mosely said he was aware of the red snapper survey when it occurred, as well as a related debate between the state of Alabama and NOAA Fisheries regarding fishing quotas, limits and seasons, but said, “I don’t read too much into their studies.”

“I only know what I see, and I don’t think the state and federal government are on the same page as far as their data,” he said.

The rodeo record for greater amberjack was a 120-pound specimen captured in 2019.

Separately, amid public outcry, both Powers and rodeo organizers have defended the decision to reintroduce sharks to the competition this year. Powers said no targeted shark species in the Gulf is listed as threatened or endangered, and the rodeo uses guidelines above federal regulations for harvesting the animals.

“We’re not doing anything different than the federal and state guidelines allow,” he said. “Whether the rodeo was happening or not somebody could go out and harvest sharks. What we’re going to do is make sure that they’re not wasted that we collect all of the important biological samples that we can from these specimens.”

Powers said the scientific data collected at the rodeo is paramount. Independently funding such a large sample for a scientific study would be an expensive, tough sell, and the resulting survey wouldn’t be representative of a species’ distribution. Plus, “scientists don’t make the best fishermen,” he said.

“Think of it this way: I have 4,000 fishermen going out there with the express purpose of catching the biggest fish in the population, at no cost to me,” Powers said. “We use this event to train some of our emerging scientists, where they learn how to remove ear bones, take measurements and samples, and interact with the public. To top it off, we can use that information to generate data about how long some of these species live and whether they are increasing or decreasing in abundance.”

Sign up for the Top 8, a roundup of the day’s top stories delivered directly to your inbox Monday through Friday.