The man who allegedly shot Lady Gaga‘s dog walker is now wanted by the United States Marshals Service after he was mistakenly released from jail.

The Marshals offered a $5,000 reward Monday for information leading to the arrest of James Howard Jackson, who was one of three charged with attempted murder and robbery after allegedly shooting Ryan Fischer and attempting to kidnap Gaga’s three French bulldogs in Feb. 2021.

He “should be considered armed and dangerous,” according to the Marshals’ statement. 
Although Jackson, 19, was one of five people arrested last year, he was released “due to a clerical error” in April. The Los Angeles Sheriff’s Department Major Crime Team has since asked for the U.S. Marshals help in apprehending him.

Fischer shared a statement shortly after Jackson’s release: “While I’m deeply concerned at the events that led to his release, I’m confident law enforcement will rectify the error.

“I ask for Mr. Jackson to turn himself over to the authorities, so resolution to the crime committed against me runs its course, whatever the courts determine that outcome to be. Thank you to everyone who is supporting me during this time,” he added.

Jackson’s full list of charges includes attempted murder, conspiracy to commit robbery, second-degree robbery, assault with a semiautomatic firearm and a felon carrying a concealed firearm in a vehicle.

RELATED: Lady Gaga’s Dog Walker Speaks Out After Man Who Allegedly Shot Him Is Mistakenly Released from Jail 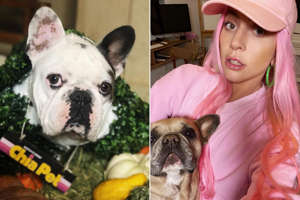 
Jackson is accused of shooting Fischer with a .40-caliber handgun as he walked the dogs in Los Angeles. He and the two other suspects then fled in a car with two of the dogs, Koji and Gustav. The animals were returned to police two days later.

Fischer was critically injured in the attack, suffering a collapsed lung. “The people in the ER, who I had seen that night, told me they didn’t think I was gonna survive that night,” he told Gayle King on CBS Mornings in September.

He also praised Gaga, 36, for her constant support after the shooting as he continued his recovery.

RELATED VIDEO: Lady Gaga’s Dog Walker Stayed in Singer’s House for ‘Months’ After Horrific Attack: ‘She’s Helped Me So Much’

“She’s helped me so much,” Fischer said. “She’s been a friend for me and after I was attacked, my family was flown out and I had trauma therapists flown to me and I stayed at her house for months while friends comforted me and security was around me.”

Shortly after the shooting, Gaga released a statement calling Fischer a “hero.”

Read the original article on People