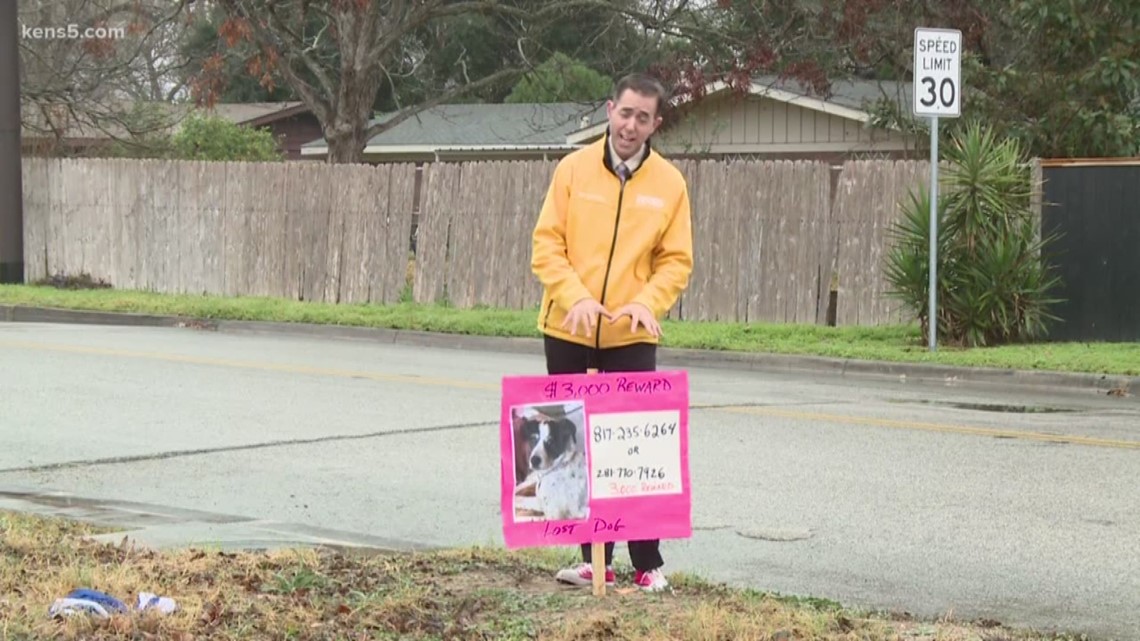 SAN ANTONIO — A New Braunfels family is pleading for help in finding their dog after she was lost by a professional dog sitter close to a month ago. They’re offering a $3,000 reward to get more people to look and bring her home.

This is the 29th day that Molly has been missing from the Walker residence. Signs are posted all over town. Melissa Parker says her father, Bruce, likely doesn’t have that much longer to live and all they want to do is bring his best friend home.

“Molly was a rescue to my parents probably about eight or nine years ago,” said Melissa Parker who lives in Dallas.

On the weekends, Molly has been coming down to try to help find Molly for her father whose health has been declining for quite a while.

“My father has been in bad health for a number of years due to prolonged seizures so he has brain damage,” Molly said.

Volunteers saw the posts on Facebook, including this find Molly Facebook page, and they jumped in to see what they could do to help this family that is missing what they say is like their child.

Dlayne Hillman the family nurse for the past four months told us, “It’s awful and you can tell in his eyes. He’s just so upset. He’s been looking for Molly every chance he can get. He’s elderly so he can’t get out anymore as much so that’s why the volunteers are doing whatever they can to help them.”

Candra Buckner, who was the first one to begin making posters added, “I felt like this man lost his best friend and it just kind of hit me in the heart and I wanted to help that family find their dog and I had the time to do it.”

They’re even using technology to try to find the most pup. Josh Jennings, another volunteer said, “I set up a game camera in one of the local parks where she was last seen that’s out facing one of the empty fields behind the park. We set up a little feeding station to see if we might be able to attract her.” Volunteer Tracie Bridge added, “My husband owns a drone business here in new Braunfels so we thought the best way to get coverage was to be up in the air. We can cover more from the air then we could on feet and on the ground.”

Parker says she couldn’t be more grateful for the help from people she had never met. She added, “I can’t even tell you hundreds of hours of their time has been spent looking for Molly. To think that total strangers are coming forward. They don’t even know my dad. They don’t know me and they are all coming forward to try and help us bring them back together.”

Molly weighs about 40 pounds, is a mixed breed and looks mostly like a pointer but she’s predominately white on her body with a little black spots and has what looks like a fluffy fox tail, symmetrical black circles around her eyes and gray eyebrows.

If you do think you see Molly the volunteers and the family so don’t approach her or call her name because that will likely scare her off. Just try to get a picture and stay nearby until there is confirmation whether or not that is Molly. That number to call is 817-235-6264.

You can also check out the Facebook page designated to help find Molly here.