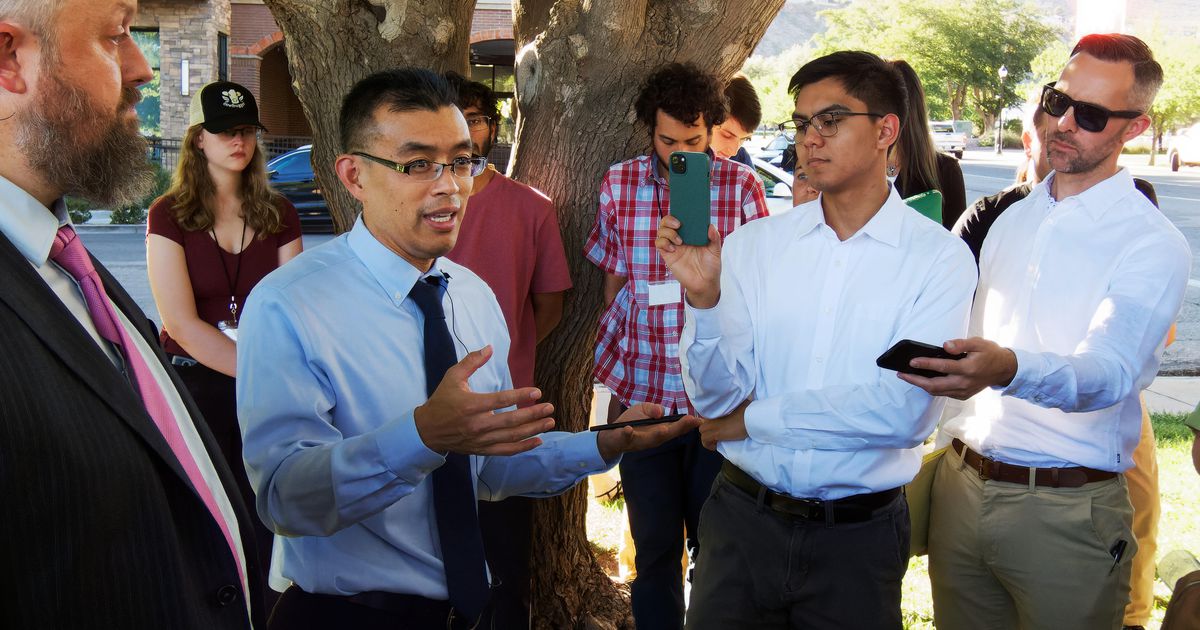 A Washington County jury found two men not guilty on all charges relating to a 2017 incident where two piglets were taken from Circle Four Farms.

Wayne Hsiung and co-defendant Paul Picklesimer, activists with the animal rights network Direct Action Everywhere (DxE), exited the 5th District Courthouse to cheers and clapping after the verdict was read Saturday afternoon. The two were part of a group of five activists who allegedly took two piglets from Circle Four Farms in Milford in 2017.

Three others within the group took plea deals, but Hsiung and Picklesimer took their case to trial — and faced up to five and a half years in jail, in addition to fines, on counts of theft and burglary of a farrowing building.

The case has drawn national attention, with an immersive video titled “Operation Deathstar” published on The New York Times website, giving a 360-degree view of the night of March 7, 2017.

Before the trial, Judge Jeffrey C. Wilcox ruled the jurors would not see that video or hear evidence about the activists’ motives. The case is about burglary, he said, not animal rights, and he limited images and videos shown during the trial to those related directly to the two piglets.

For instance, he ordered that the defense cut in half an image of one of the piglets that showed the bloody teat of the mother pig.

Yet much of the testimony about the value of the piglets kept returning to the conditions in which they were kept, and the likelihood of whether they would have survived.

State veterinarian Dr. Dean Taylor testified Wednesday about a United States Department of Agriculture chart that describes the price of different pigs at different times of year. Based on that, he said, the piglets would each have a value of $42.20.

But Dr. Sherstin Rosenberg, a veterinarian who examined footage of the piglets after they were taken from the Milford farm, disagreed with that value Thursday. Between their injuries, low body weight, malnourishment and diarrhea, the two piglets each would have required hundreds of dollars in medical attention to survive, she said.

The USDA figure is for pigs that weigh 10 to 12 pounds and are old enough to be weaned, she said, while these piglets — named Lizzie and Lily — were considerably smaller and not yet independent.

Taylor returned to the stand Friday to critique Rosenberg’s points, arguing that she had “exaggerated” their condition and that Smithfield could have delivered care at a fraction of her suggested costs.

But Hsiung asked Taylor and a Smithfield employee about the likelihood that the one or two veterinarians at the facility would ever have been able to attend to the piglets, when each would be responsible for seeing some 1,600 pigs a day.

And Corporon objected that Taylor’s description wrongfully implied to the jury that the piglets were about to get care.

In closing arguments, Christiansen attacked Rosenberg’s credibility, noting she operates the Happy Hen Animal Sanctuary and describing her as “another advocate.”

Hsiung, a co-founder of DxE, told jurors: “I was there on the night of March 7, 2017. I did remove two piglets from Smithfield Foods.”

However, he contested that he had taken anything of value from Smithfield — one of the elements prosecutors must prove for theft and burglary charges.

And he maintained that Picklesimer was only a cameraperson, there to document whether mother pigs were being kept in confined spaces called gestation crates. Picklesimer did not testify.

Three other activists charged in the case previously took plea deals. Christiansen argued that each person in the group that night had a job and each “was part of the crime.” Picklesimer “had a vitally important role,” he said, creating the video that helped draw $50,000 in donations to DxE in 2017, and dismissed Picklesimer’s “pathetic excuse that he didn’t touch the pigs.”

But Corporon argued “it’s clear Paul Picklesimer never intended to commit a theft,” pointing out he was holding a “enormous” camera. It’s illogical to say he could “carry a squirming pig at the same time,” she said.

If jurors did consider him culpable, she said, she urged them to consider that the sick piglets, “plainly and simply, have no value.”

Prosecutors could have charged Picklesimer with a different crime, such as trespassing, she said. But they instead accused him of burglary and theft — and she asked jurors to find him not guilty of those counts.

Hsiung urged the jury to “make a decision of conscience,” saying it could lead to companies being more compassionate and governments being more open to animal cruelty complaints.

Their verdict, he said, could make the world a kinder place, “even for a baby pig in a factory farm.”

During the trial, the judge dismissed one count of burglary against each of the men, who had been accused of also entering a different building. The remaining burglary count is a third-degree felony, which carries a possible sentence of zero to five years in prison. The theft count is a class B misdemeanor, punishable by up to six months in jail. Each count also carries fines.

The trial was moved to Washington County from Beaver County after Wilcox said he was “concerned” about the small size of the community and the small jury pool, given heavy media coverage that could influence local opinion.

Smithfield told its employees in June that it would be cutting its operations in Beaver County to a third, threatening the jobs of a quarter of the county’s workforce and prompting the local government to announce a state of economic emergency. The defense had urged Wilcox to move the trial, arguing that county residents being so heavily affected by Smithfield’s departure may bias jurors against Hsiung and Picklesimer.

Supporters gathered outside the St. George courthouse during the trial.

(Mark Eddington | The Salt Lake Tribune) Supporters of the animal rights network Direct Action Everywhere gather at the Electric Theater in St. George, Thursday, Oct. 6, 2022, to watch a trial in which two activists from the network are accused of stealing piglets from a farm in Beaver County.

“We’re here protesting, but mostly also just supporting and raising awareness,” said Almira Tanner, lead organizer at DxE. She estimated that over 100 supporters were in St. George on Thursday.

Only 10 supporters were allowed in the court room at a time, but others watched the trial from The Electric Theater, which DxE rented in St. George.

Lewis Bernier, an organizer with DxE who said he’s a friend of both Hsiung and Picklesimer, drove from San Francisco to be there. Picklesimer is “probably the person that I know that enjoys being outdoors the most,” he said, adding “it just breaks my heart to think of him and Wayne being locked up.”

Correction • This story has been updated to reflect that the trial was in Washington County.

Leto Sapunar is a Report for America corps member covering business accountability and sustainability for The Salt Lake Tribune. Your donation to match our RFA grant helps keep him writing stories like this one; please consider making a tax-deductible gift of any amount today by clicking here.