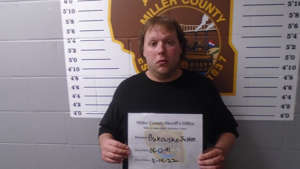 A Miller County man pleaded guilty to a felony charge of first-degree statutory sodomy on Wednesday and was sentenced to a fifteen-year prison sentence.

According to a press release from the Miller County Prosecuting Attorney, Justin Bukowsky, 31, of Eldon admitted that he “knowingly had deviate sexual intercourse” with a child less than fourteen years old.

According to court documents, Bukowsky was arrested in October 2018 after admitting to a police officer he had sexually abused a  seven-year-old girl while intoxicated. The incidents took place in May, according to the document.