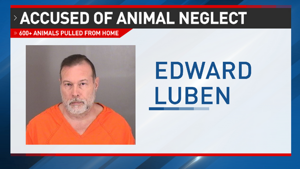 SARPY COUNTY, Neb. (FOX42KPTM) – A Papillion man accused of animal cruelty has pleaded no contest to charges almost one year since hundreds of animals were pulled from a home.

Edward Luben made the plea in a Sarpy County courtroom today.  He’d been facing 12 charges both felony and misdemeanor.  Nine of those charges were dropped, but he pleaded no contest to three of the 12.

In December of 2021, the Nebraska Humane Society removed more than 600 animals ranging from exotic birds to reptiles and amphibians near 84th and East Centennial Streets.

Dozens of them were found dead.

Luben is scheduled to be sentenced in January.