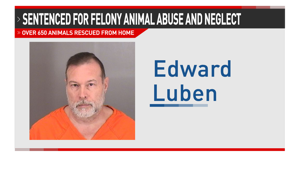 A Papillion man was sentenced on Tuesday for the abuse and neglect of over 600 animals that he had been keeping in his home.

A Sarpy County District Court Judge sentenced Edward Luben, 57, to three consecutive 12-month terms relating to felony animal cruelty and neglect, followed by 9 months of supervised probation, and a 15-year prohibition of owning, harboring, or residing with any animal.

In December of 2021, the Nebraska Humane Society removed more than 650 animals ranging from exotic birds to reptiles and amphibians from his home near 84th and East Centennial Streets.

About 70 of those animals were dead, while many others were severely neglected and malnourished.

Luben had been facing 12 felony and misdemeanor charges, but pleaded no contest to three of the 12 after the other nine charges were dropped.