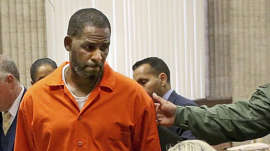 Popular American singer R Kelly is in trouble now. A federal jury in Chicago convicted him on Wednesday, September 14, of producing child pornography and enticing girls for sex after a monthlong trial in his hometown. This delivers another legal blow to the Grammy Award singer who was once one of the world’s biggest R&B stars.

According to AP reports, the prosecutors won convictions on six of the 13 counts against R Kelly. Many of these convictions carry long mandatory sentences. But the government lost the marquee count — that Kelly and his then-business manager successfully rigged his state child pornography trial in 2008, states AP. Meanwhile, both of his co-defendants, including longtime business manager Derrel McDavid, were acquitted of all charges.

The trial was, in ways, a do-over of Kelly’s 2008 child pornography trial, with a key video critical to both. Reports state that Kelly gave a thumbs-up sign to spectators after Wednesday’s verdict but otherwise showed little emotion.

The verdict comes months after a federal judge in New York sentenced Kelly to 30 years in prison in June for racketeering and sex trafficking. Based on that sentence, the 55-year-old won’t be eligible for release until he is around 80. Meanwhile, two sexual misconduct trials still await Kelly — one in Minnesota and one in state court in Chicago.