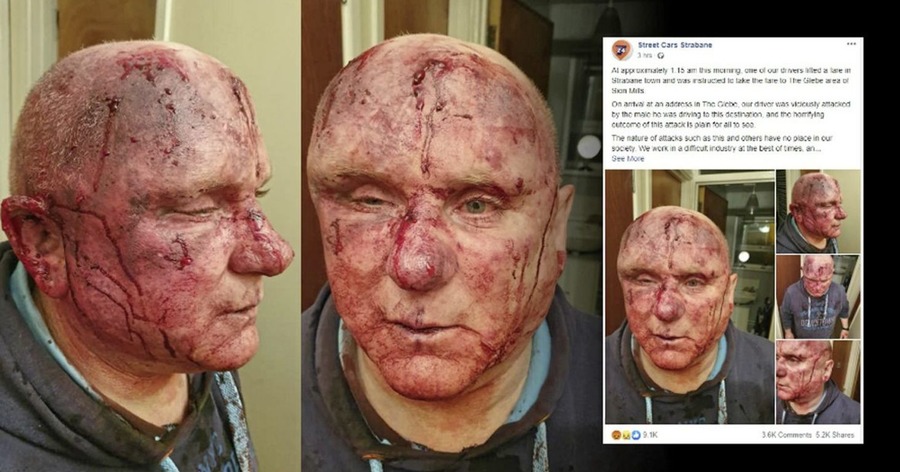 A REWARD for information has been offered after a taxi driver was “viciously attacked” in Co Tyrone.

Strabane taxi firm Street Cars said one of its drivers was attacked yesterday by a male picked up in the town as he was being dropped off in Sion Mills.

The business posted graphic photos online showing a heavily bloodied man whose head is covered in bruises and other injuries.

Patrick McLaughlin, owner of Street Cars, described it as a “brutal attack” and said he was personally offering a cash reward to anyone with information.

He said the attack happened when the driver lifted a fare in Strabane town at about 1.15am and was instructed to take the fare to the Glebe area of Sion Mills.

“On arrival at an address in the Glebe, our driver was viciously attacked by the male he was driving to this destination, and the horrifying outcome of this attack is plain for all to see,” Mr McLaughlin said on Facebook.

“The nature of attacks such as this and others have no place in our society. We work in a difficult industry at the best of times, and the financial gain is petty in return.

“Attacks such as this are no different to attacks on medical staff or emergency service providers. We work alone and too many times we are exposed to certain threats that remain between the driver and the fare.

“I personally have decided to put up a cash reward to anyone with information on this brutal attack. Although this happened at 1.15am, it took place in a built-up area and I’m certain it was witnessed by someone in the park concerned. Any information submitted to me will be treated with anonymity.”

He added: “I wish to offer our driver a swift recovery and to relay to him that the thoughts of everyone in our firm, and indeed most people in our town are with him and his family at this difficult time.”

The injured man was taken to hospital for treatment to his injuries.

An 18-year-old man was arrested by police investigating the attack in the Glebe Gardens area.

Meanwhile, a taxi driver was injured yesterday in a shooting incident in Drogheda, Co Louth.

It happened at George’s Street near the Bridge of Peace shortly after 6.20pm after shots were fired at a taxi.

The shots were fired from a car which then fled the scene.

RTÉ reported that it understood the taxi driver was not the intended target of the attack, which it said related to a gangland feud.