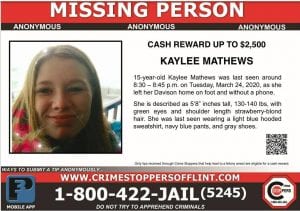 DAVISON – Davison police have turned over the investigation of a missing 15-year-old girl to the Genesee County Sheriff’s Department after receiving no leads into her disappearance after four days.

Interim Sheriff Chris Swanson appealed to the public to come forward with any information it has to help bring Kaylee Mathews home, but warned anyone hiding the girl will face charges.

“If you’re housing her because you think that’s the best option, mark my words – we will have no tolerance for that,” said Swanson.

The sheriff spoke to the press Saturday evening as the girl’s parents stood by. He described the family having a conversation Tuesday with Kaylee about her online activity when she took off out the door of the family’s home and did not return.

She did not take her phone with her and Swanson said there has been no activity on her social media accounts since Tuesday. He said she is usually active on Facebook, Instagram, Snapchat and TikToc.

Swanson said the sheriff’s department is putting all of its resources into finding the girl and urged anyone with information to call Crime Stoppers at 800-422-JAIL. All tipsters on Crime Stoppers can remain anonymous and there is a $2,500 reward offered for information leading to the girl’s safe return.

Swanson said the investigation has so far involved the FBI, The Michigan State Police, FANG, Davison Township Police and the Davison City Police. He said Davison Police Chief Don Harris called him this morning and asked that the sheriff’s department take the lead in the investigation.

He said the last contact with the girl was at her home on March 24 before she left on foot. Earlier reports said she was riding a bicycle, but that was later found still parked in her parent’s garage.

Swanson said it is possible Kaylee is interacting with someone who may have coerced her or is taking advantage of girl who needed safety. He said if someone is housing her, this is their only chance to call the police and send her home.

“Our mission is for safe return of this little girl,” said Swanson.

Kaylee is described as 5-foot-10-inches tall and weighs between 120-130 pounds. She was last seen wearing a light blue sweater, navy leggings and grey shoes.