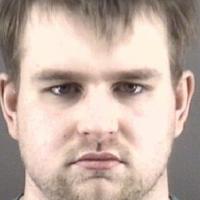 The nonprofit group People for the Ethical Treatment of Animals sent a letter Friday to the Kernersville charter school that a Winston-Salem man convicted of torturing and killing small animals attended, asking the school to adopt a curriculum designed to prevent young people from committing acts of animal cruelty.

Indictments allege that the man, Caleb Daniel Dewald, committed acts of animal cruelty off campus of the school between 2017 and 2021. Dewald graduated from the N.C. Leadership Academy in 2020.

Dewald pleaded guilty Wednesday in Forsyth Superior Court to 10 counts of felony animal cruelty. Judge Michael A. Stone gave him four consecutive suspended sentences of six months to 17 months and placed him on 30 months of supervised probation. He has to serve a 4-day active jail sentence within the next 30 days, get a mental-health assessment and continue with therapy.

Andrew Burton, an assistant with TeachKind, PETA’s humane education division, wrote a letter to James A. Davis II, chair of the school’s board of trustees. Davis did not immediately respond to an email message seeking comment.

“According to reports, NCLA administrators were aware of Dewald’s alleged proclivities while he was a student there, but adequate steps do not appear to have been taken to prevent further violence toward animals,” Burton wrote. “In light of this disturbing account, we’d like to open a dialog about how we can equip your staff members with the tools they need to address students’ aggressive actions, foster prosocial behavior throughout the entire student population, and help prevent further tragedies.”

Principal Renee Faenza said Friday school officials will evaluate PETA’s proposal and see whether it fits into the school’s curriculum.

“However, the statements he makes about the school and the school’s culpability are ill-informed,” she said. She declined to elaborate further.

The Forsyth County Sheriff’s Office received an anonymous tip from Crime Stoppers on June 29, 2021 that Dewald was trapping, torturing and killing small animals and that he was then posting videos of the abuse on the web. The next day, a PETA official sent an email to the sheriff’s office, along with five videos showing Dewald drowning opossums and squirrels, torturing rats and drowning and stoning squirrels. One of the videos shows Dewald soaking a squirrel in WD-40 oil and setting it on fire.

Assistant District Attorney Mark Parent said in court Wednesday that Dewald narrated the videos and laughed while the animals were clearly suffering. According to search warrants, one of the videos appeared to have been recorded earlier than the other ones, and investigators traced that one back to when Dewald was a student at N.C. Leadership Academy.

“Administration advised they remembered Caleb Dewald and stated there were numerous incidents in which Caleb was brought to their attention due to having photographs of animal cruelty,” Dakota Faircloth, an investigator with the sheriff’s office, wrote in affidavits for the search warrants. “The applicant was told there were images of rats, squirrels and cats being tortured and flayed.”

School administrators confirmed that the voice in the video belonged to Dewald and told investigators that when Dewald was once searched for drugs and weapons, they found a journal, according to the search warrants. The journal had entries that had “drawings and confessions regarding the killing and torturing of different animals.” Because the journal was considered private property, it was returned to Dewald, the search warrants said.

Kenneth Montville, senior education projects manager for PETA, said the organization has spent years creating curriculum designed to help prevent animal cruelty. That work is important because studies have shown links between animal cruelty and violence against humans, he said. Montville said 43% of school shooters have had a previous history of abusing animals.

Most school systems that PETA has worked with have been responsive, and the curriculum has been designed by former teachers, he said. The aim is not to make teachers’ jobs more difficult but this type of education is more important than ever, Montville said.

“The consequences of youth who commit violence against animals are destructive and very far-reaching so the best way to prevent future violence is with empathy training while they are still young,” he said.