An Erie County man is being hailed as a hero for breaking into a local school to shelter more than 20 people and two dogs during the deadly blizzard that rocked the area.

Jay Withey, a mechanic for the town of Cheektowaga, was asked by a friend who had become trapped for help.  Without hesitation, he jumped into his truck and ventured out into the storm.

As he was driving, he came across an individual named Mike, who was walking in the blizzard with just sneakers and a light coat.  He told the young man to hop in the truck to stay warm.  Unfortunately, Withey’s truck became stuck twice, and the second time he could not shovel out.

Leaving Mike in the warm truck, Withey knocked on the doors of some houses in the area, offering $500 for a warm place to spend the night, but no one would let him stay.  He returned to his truck, but not before becoming disoriented in the blizzard conditions.

“My vision is getting foggy, my body is cramping up, and I’m fearing for my life,” he said.

He eventually made it back to the truck and was overcome with exhaustion, and he tried to take a nap.  Around 11 p.m., he heard someone knocking on the truck’s window.  Mary, an elderly woman, had been stuck in her car since 4 p.m. and asked for help.  He told her to get inside with him and Mike.

When Mary had to use the bathroom, Withey used his phone’s GPS to see what was nearby and noticed EDGE Academy.  He used an extra set of brake pads to smash a window.  They found heat, food, and gym mats to sleep on inside the school.

Withey left the school to see if anyone else was stuck nearby and began discovering many people were still stranded in their cars.  In total, he was able to rescue more than 20 people and two dogs by bringing them to safety.

Withey stayed with the group until 8 p.m. on Christmas, ensuring that everyone could free their vehicles and they were safe.  Before leaving, he left a note at the school apologizing for breaking the window and setting off the alarm.

“To whomever it may concern, I’m terribly sorry about breaking the school window and for breaking in the kitchen,” Withey wrote.  “Got stuck at 8 p.m. Friday and slept in my truck with two strangers, just trying not to die.”

He explained, “There were 7 elderly people also stuck and out of fuel.  I had to do it to save everyone and get them shelter and food and a bathroom.”

Cheektowaga Police were able to locate Withey after sharing his note and the school’s surveillance footage with the public.  Police Chief Brian Gould told CNN that Withey’s actions were heroic, calling him a good person.

“We were absolutely shocked to see that he had over 20 people in the school (and) two dogs,” he said.  “Not only a heroic action but just an overall good person.”

He added, “He definitely saved some lives that day.” 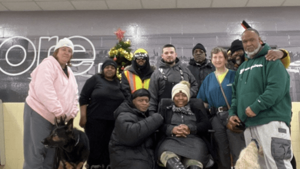 The post Buffalo-Area Man Hailed As A Hero For Breaking Into A School To Provide Shelter For More Than 20 People During The Blizzard appeared first on Baller Alert.