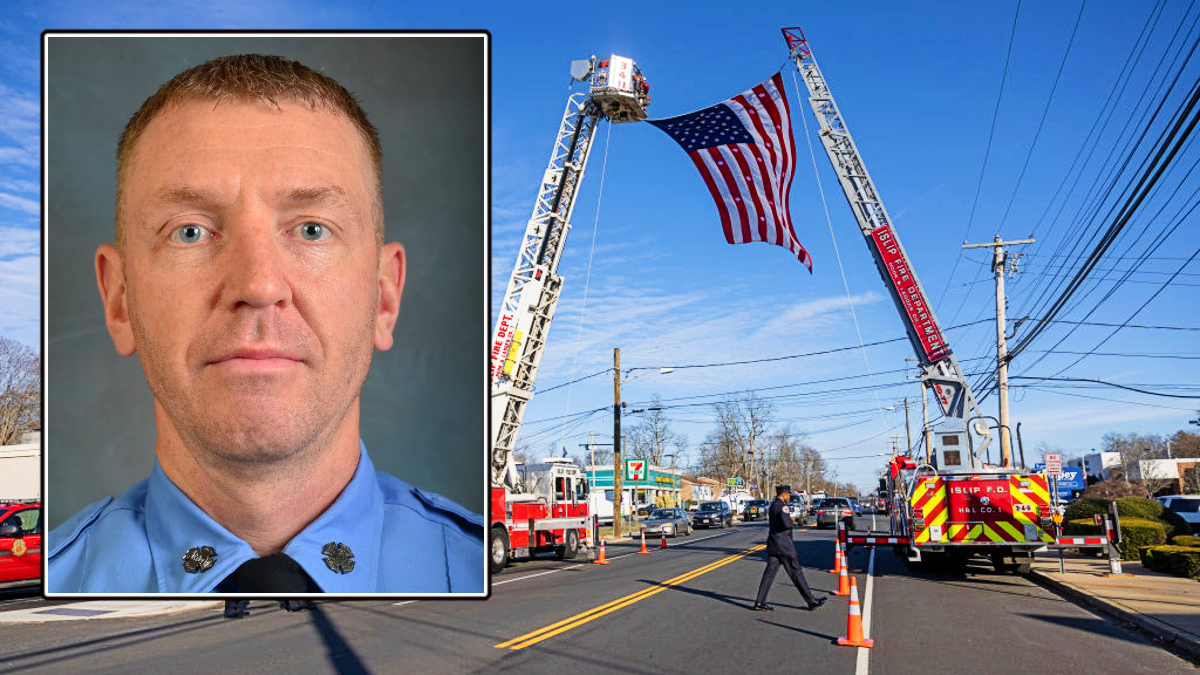 Hundreds of friends, family members and colleagues gathered Thursday to mourn the New York City firefighter and married father of two who died after suffering severe head trauma in a training accident at his firehouse earlier this month.

William P. Moon II was eulogized at St. Patrick Roman Catholic Church on Clinton Avenue in Bay Shore, as loved ones said their final goodbyes. Friends and colleagues paid their respects, telling the story of a man who they always said put others first.

“As a leader, he led by example and put his arm around less-experienced firefighters, and reminded them they’re a valuable part of the team,” said FDNY Lt. James Keene.

The 21-year FDNY veteran known as Billy fell about 20 feet while preparing for a drill at his Sterling Place firehouse in Brooklyn shortly before noon on Dec. 12. He suffered a serious head injury and was taken to a hospital in critical condition, but Mayor Eric Adams and FDNY Commissioner Laura Kavanaugh said it became clear he wouldn’t make it.

“We are going to miss firefighter Moon. But he wasn’t only a hero in life — he understood what it was to be a firefighter: Courage, bravery and sacrifice,” said Adams.

Moon’s son Collin spoke on Thursday, saying that he is “really sad to see him go. One thing is that he says his favorite job is fireman. But it’s really being a dad.”

His family decided to donate his organs to save the lives of others.

LiveOnNY, a nonprofit that helps people like Moon live on through organ and tissue donation, confirmed a few days before Christmas that his heart, lungs, liver and kidneys saved the lives of five, including three people in New York.

“Firefighter Moon was a hero in life and is now a hero in death who will live on through the gracious gifts of organ donation,” LiveOnNY President and CEO Leonard Achan said at the time. “We extend our deepest condolences to the Moon family. Our thoughts and prayers remain with them during this difficult time.”

His long hair will also soon be cut to help kids getting cancer treatment.

Moon was 47 years old. The Islip, Long Island, resident is survived by his wife, Kristina, and their two children. A wake was held for him Wednesday.

“Billy would not simply suggest you become an organ donor, he would demand at the kitchen table that his coworkers pull out their drivers licenses and prove to him they had the hear under the photo that indicated they signed up to be a donor,” Kavanaugh said.

“Loving Billy was not only a marriage of families but a marriage to the fire department. His love and passion for the job extend far from the firehouse walls,” his wife Kristina said in a letter read by Kavanaugh after his death. “He instilled that same passion in our children and always talked about how important it was to help others.”

Adams called the loss “heartbreaking” for all involved.

“Firefighter Moon was a dedicated public servant, who spent more than two decades saving the lives of New Yorkers and will continue to do so in his passing,” Adams said in a statement. “We join the entire fire department and every New Yorker in mourning his loss, and pray for Firefighter Moon, his family, and his friends.”

Moon joined the FDNY in May 2002. He began his career in Ladder Company 133 in Queens, where he worked for 20 years before being detailed to Rescue Company 2, in Brooklyn earlier this year. He had been working as a member of the fire department’s elite special operations rescue company for nearly a year.

“This type of work requires extensive training. Billy was preparing for one of these training exercises when this tragic accident occurred,” said FDNY Chief of Department John Hodgens. “Billy is a dedicated firefighter who we will always remember as an important member of the New York City Fire Department. His legacy will live on forever.”

Moon is the 1,159th member of the FDNY to die in the line of duty. The last prior to him was EMS Captain Alison Russo, who was stabbed to death in a gruesome act of violence on a Queens sidewalk in late September.

“Our hearts are broken for Firefighter Moon’s family and friends, and for our entire department,” Kavanaugh said. “Firefighting was in his bones, and he embodied the spirit and passion of our department. He was passionate about organ donation, and just as he saved countless lives working out of the firehouse, he will continue to save lives in his passing.”

In addition to serving the FDNY, Moon volunteered with the Islip Volunteer Fire Department in his hometown. He served as chief there in 2017.

“Billy, you are my best friend. You’ll be our forever hero. We love you,” said wife Kristina at the funeral.