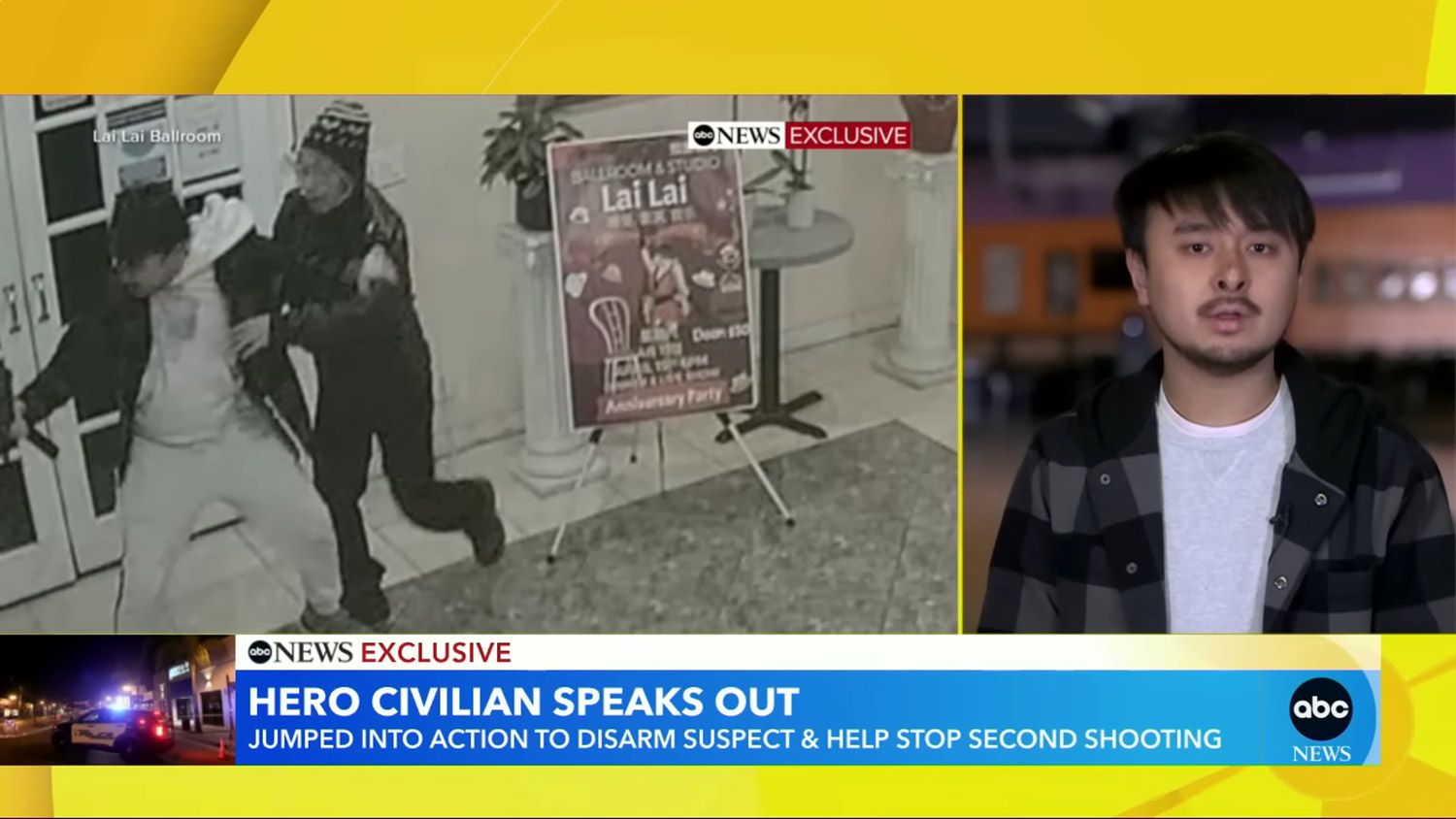 In a new interview on Good Morning America, the man who disarmed the Monterey Park mass shooter spoke out about his heroic actions, which police have said likely saved many lives.

Brandon Tsay, 26, said festivities were coming to a close after a Lunar New Year Celebration at Alhambra, Calif.’s Lai Lai Ballroom & Studio on Saturday, which Tsay helps run with his family.

It was late, Tsay said, and most of the revelers had already headed home. That’s when he heard the front door open and shut, he told ABC News’ Robin Roberts. “I turned around and saw there was an Asian man holding a gun,” Tsay said, noting he didn’t recognize the man. “My first thought was that I was gonna die here, this was it.”

The gunman — who has since been identified as Huu Can Tran, 72 — started “looking around the room,” searching for “targets” to shoot, Tsay recalled. That’s when Tsay sprung into action.

For more on this story, listen below to our daily podcast PEOPLE Every Day.

“He started prepping the weapon and something came over me,” Tsay recalled. “I realized I needed to get the weapon away from him. I needed to take this weapon, disarm him or else everybody would have died.”

“When I got the courage, I lunged at him with both my hands, grabbed the weapon and we had a struggle,” the man said. “We struggled into the lobby, trying to get this gun away from each other. He was hitting me across the face, bashing the back of my head.”

Tsay told GMA he used his elbows to get the gun away from the shooter, and after a struggle, he said he pushed the shooter away and pointed the man’s gun at him, yelling, “Get the hell out of here! I’ll shoot! Get away! Go!” before calling police.

“I thought he would run away, but he was just standing there contemplating whether to fight or to run,” Tsay said.

The shooter finally “turned around and walked out the door, jogged back to his van.”

At that point, Tsay didn’t know that the assailant had just fatally shot at least 10 people and wounded 10 others about 17 minutes earlier, in the other attack in nearby Monterey Park. That shooting occurred at Star Dance Studio at about 10:20 pm.

The fatal attack occurred on the eve of the Lunar New Year, a major holiday in many Asian communities. Earlier in the day, tens of thousands of people had gathered in the area to celebrate the holiday.

The then-unidentified suspect fled immediately after the shooting and was at large until mid-day Sunday. Authorities released photos of the shooter as they searched for him.

The shooter was ultimately found dead in Torrance after a daylong search. He fatally shot himself after authorities used armored vehicles to find the white van he was driving at the time.

The shooter was a Hemet, Calif., resident who had been a patron at Star Dance Studio.

Want to keep up with the latest crime coverage? Sign up for PEOPLE’s free True Crime newsletter for breaking crime news, ongoing trial coverage and details of intriguing unsolved cases.

The motive for the shooting is unclear.

The 10 deceased victims have not yet been identified, but authorities said five men and five women were killed.

Monterey Park, where the shooting spree occurred, has a population of about 60,000 people, 65% of whom are Asian, according to the 2020 census.

The New York Times reports that in the 1990s, the city claimed to be the first city in the continental United States where the majority of residents were of Asian descent.

After the shooting, President Joe Biden wrote on Twitter, “Jill and I are praying for those killed and injured in last night’s deadly mass shooting in Monterey Park. I’m monitoring this situation closely as it develops, and urge the community to follow guidance from local officials and law enforcement in the hours ahead.”

Gov. Gavin Newsom also expressed his sadness over the incident on Twitter: “Monterey Park should have had a night of joyful celebration of the Lunar New Year. Instead, they were the victims of a horrific and heartless act of gun violence. Our hearts mourn as we learn more about the devastating acts of last night. We are monitoring the situation closely.”