Their quick-thinking made a huge difference

You asked for more good news on CBCKidsNews.ca and we delivered.

We hope this makes you smile today!

Is there a #goodnews story you think we should be covering?

Summer is usually a time for relaxation.

But for three Canadian kids, harrowing fires and near-death experiences in July and August forced them to spring into action.

They became heroes and saved the people they loved.

Here are their stories.

Saved his grandmother from choking 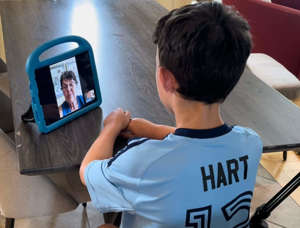 © Provided by CBC Kids News A boy in a blue jersey speaks with an older woman through video chat on a tablet.


Simon Hart takes a Zoom call with his grandma, Mary Oldford, who is still alive, thanks to him. (Image credit: Ryan Cooke/CBC)

Nine-year-old Simon Hart was enjoying a visit with his grandma, Mary Oldford, at home in St. John’s, Newfoundland, when disaster struck this past July.

While Oldford was taking a bite of her grandson’s grilled cheese sandwich, a piece got stuck in her throat and she began to choke.

Fortunately, Simon knew just what to do: two years ago, he took a first aid course where he was trained in the Heimlich manoeuvre.

The Heimlich manoeuvre is a technique where you stand behind a person who is choking and wrap your arms around their abdonym. By putting pressure on their airway and thrusting your arms, it can dislodge whatever is blocking their airway — and can even save someone’s life.

In an interview with CBC News, Simon explained how he stayed cool under pressure.

“I pumped it six times and it never came out, so then I slapped her on the back really hard, and then I did it another six times. And it finally came loose,” he said.

“[It was] the scariest moment of my life, definitely.”

His grandmother was impressed with how calm Simon was during the ordeal.

“That was the biggest surprise to me, was how anybody could be so calm,” Oldford said.

The experience was a valuable lesson for the whole family. His mother emphasized the importance of learning first aid at any age, since you never know when it could come in handy.

Saved an apartment complex from a car fire 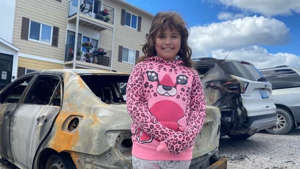 © Provided by CBC Kids News A girl in a pink leopard sweater stands in front of a burned out car in front of an apartment building.


Grace-Ellen Beaulieu stands in front of the car she noticed was on fire early one morning in her hometown of Yellowknife, Northwest Territories. By calling the police quickly, she helped stop the flames from spreading, including to a nearby apartment complex. (Image credit: Rose Danen/CBC)

Grace-Ellen Beaulieu, 8, was just trying to get back to sleep one morning in early August when she looked outside her window and noticed a car was on fire in the parking lot, which backed onto a nearby apartment complex.

“I just felt scared, so I just snatched my mom’s phone and called 911,” said Grace-Ellen in an interview with CBC News.

Thanks to her quick-thinking, local police in her hometown of Yellowknife, Northwest Territories, swiftly came to the scene to extinguish the burning car.

While the vehicle was destroyed, Grace-Ellen’s phone call stopped the flames from spreading to nearby cars, where it could have potentially caused a deadly gas explosion.

The police thanked Grace-Ellen for her heroism. The captain of the fire department even gave her a high-five.

“She saved the whole building by responding really quickly with that call,” said  Beaulieu. “It just teared everybody up. We were all just like, ‘Wow, Grace. I believe you are a hero today.’”

Saved his family from a house fire 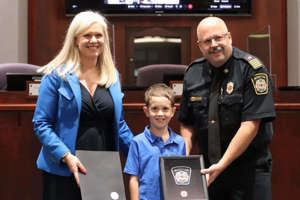 © Provided by CBC Kids News A boy stands between his mom (left) and a firefighter (right) who is presenting him with an award.


Eight-year-old Felix Dalley, centre, poses with his mom Amy, left, and an official from the Moncton Fire Department. Felix was given a special crest and a gold coin to recognize his bravery. (Image credit: Shane Magee/CBC)

On May 23, Felix Dalley, 8, was playing on his front porch when he saw a plume of black smoke coming from his house.

Scared, he ran off to find his family, who were inside, and alerted his uncle to the fire.

Felix’s family — his father, uncle, brother and cousin —- all managed to escape out the back door before the home went up in flames, about 10 minutes later.

In an interview with CBC News, Felix’s mother, Amy Dalley, who was at work during the incident, praised her son for trusting his instincts.

“Felix had told me after that he remembered his dad telling him that black smoke indicates danger,” said Dalley.

The Dalley family home is currently being rebuilt and they are living in temporary housing.

Their cat was also never found.

In July, Felix was presented with a certificate of recognition from his hometown of Moncton, New Brunswick.

He also received a special crest from the city’s fire chief and a gold coin from the Moncton Fire Department.

While the crest and coin are usually only given to firefighters, they made a special exception for Felix.

“He is a true hero and his actions will never be forgotten,” said Moncton fire Chief Conrad Landry.