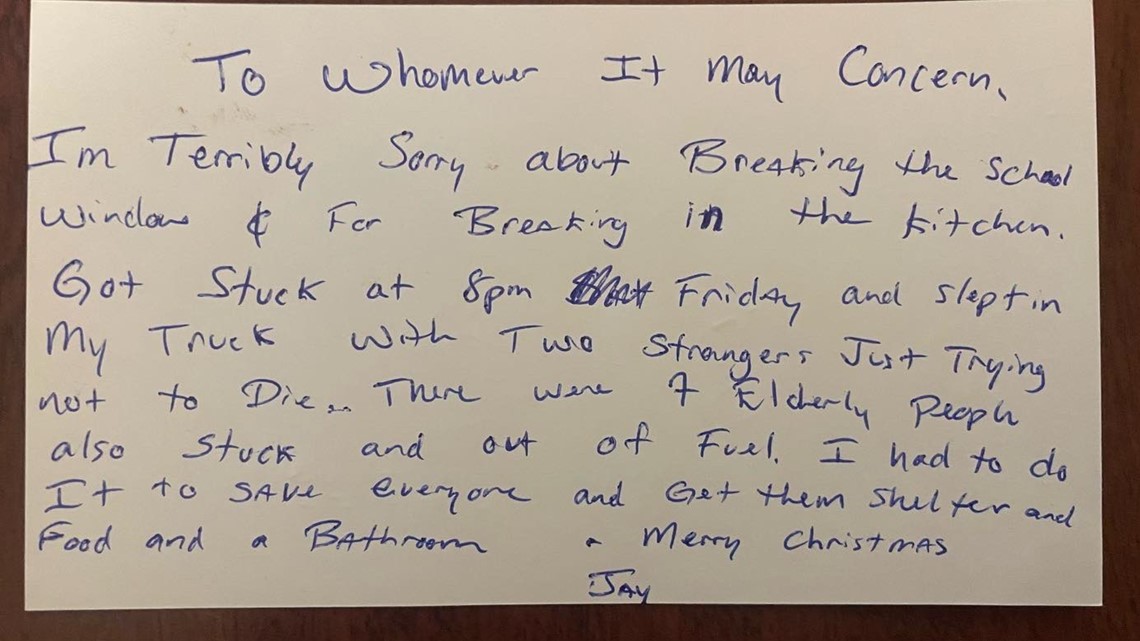 Police are looking to identify “Merry Christmas Jay” who helped bring people to shelter in a school.

CHEEKTOWAGA, N.Y. — The Cheektowaga Police Department is asking for the public’s assistance in identifying a local hero.

They are asking if anyone know who “Merry Christmas Jay” is. Jay helped bring people into Pine Hill School and get them out of the blizzard. The police department would like to thank Jay for his heroism.

The police department shared some security camera footage that shows Jay and also a note that he left apologizing for damage and using a snow blower to clear a path.

Jay said in his note: “Got stuck at 8 p.m. Friday and slept in my truck with two strangers just trying not to die. There were seven elderly people also stuck and out of fuel. I had to do it to save everyone and get them shelter and food and a bathroom.”

Do you recognize “Merry Christmas Jay”? He pulled people from cars & sheltered them in a near by school.He left a note apologizing for the damage & use of the snow blower he used to make a path to the school.We want to thank “Jay” for his heroic actions that saved people’s lives. pic.twitter.com/iqdKitwEHa

The Cheektowaga Police Department shared the photos above of the note and people who sheltered in the school.

Officers responded to the school when they could because an alarm was set off. Officer originally thought the alarm was set when the strong winds broke the window, until they found his note.

The freezer was still full of food, officers say people only ate what they needed to survive.

In addition to the 10 people, there were two dogs. They pulled a SmartBoard out to watch news updates, and they were sure to put it back and clean everything up when they left, according to a Facebook post by Cheektowaga Police.

Around 2 p.m., two hours after the Facebook post was made, people were already posting that they know who Jay is or they were one of the people he helped save.