STAVANGER, Norway — With natural gas scarce and pipelines in peril, Europe has rarely needed Norway more. Or resented it as much.

More than seven months into the war in Ukraine, the Scandinavian country is increasingly central to Europe’s energy security. Norway, not Russia, is now the European Union’s leading natural gas supplier. The explosions that damaged Russia’s Nord Stream pipelines didn’t lead to a supply crisis because the E.U. had cut its reliance on Russian gas and was celebrating a new pipeline from Norway to Poland the same week.

Countries are counting on Norwegian fuel to get them through the winter months — and to help fill their stocks for years ahead.

But even as Oslo ups exports to Europe, the do-gooding home of the Nobel Peace Prize faces pointed criticism from the continent, including charges that its windfall oil and gas revenues amount to war profiteering.

There is no question that the fallout from the war is making Norway richer. The state is a major player in the oil and gas industry. All told, Oslo expects to bring in about $109 billion from the petroleum sector this year — $82 billion more than in 2021. Much of that will go to the country’s sovereign wealth fund, a national nest egg worth more than $1 trillion. 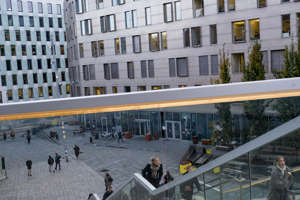 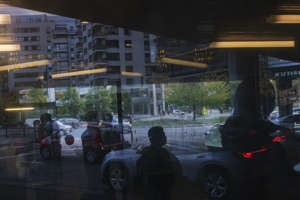 
Critics call the energy income obscene. Poland’s prime minister has urged Norway to share its “excess, gigantic” profit with Ukraine, accusing the Oslo of indirectly “preying” on the conflict.

U.S. companies, too, have come under criticism for making massive profits off natural gas sales to Europe. But the Norwegian government’s deep involvement in the oil and gas industry — and the fact that they are right next door — makes Norway’s situation more fraught.

Norwegian officials have rebuffed claims of profiteering. They cast high prices as an unavoidable result of market scarcity. And they point to the country’s support for E.U. sanctions, its military aid for Ukraine and its efforts to get European countries what they so desperately need: gas.

At the heart of the debate are questions about what it means to be “good” on energy — amid a war, inflation and a climate crisis.

Those issues were front and center this past week, as Norway’s prime minister, Jonas Gahr Store, joined European leaders for an informal summit in Prague, where the focus was Russia’s war in Ukraine and the European response. On Thursday, Brussels and Oslo said they had agreed to “jointly develop tools” to stabilize energy markets and “reduce excessively high prices in a meaningful way” — but did not say what that would involve.

For months now, a small group of Norwegian lawmakers have called for petroleum profits in excess of what was predicted for 2022 to be put into a “solidarity fund,” arguing that it is unfair — and unwise — to squirrel so much away while Ukrainians suffer, European economies teeter on the brink of recession and high commodity prices hit the developing world.

“It is not our fault that Putin is waging this energy war on Europe,” said Lan Marie Nguyen Berg, a member of parliament representing the Norwegian Green Party. “But we can decide what we want to do with what we earn from this.”

The E.U. has separately agreed to a windfall tax on some energy producers and a “solidarity contribution” from fossil fuel companies, money that will be used to cushion the impact of high electricity prices on consumers within the E.U. Some hope that Norway, which is not an E.U. member, will decide to join in or work with the bloc on other measures, such as a price cap on gas.

The Norwegian government has shown little enthusiasm on either front. Ask officials about high prices and they say it’s a question for industry; ask industry, they will say it is matter for officials — despite the fact that the state owns much of the sector. 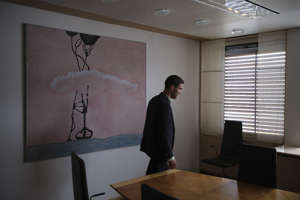 
Andreas Bjelland Eriksen, state secretary at the Ministry of Energy and Petroleum, denied that Norway is unduly profiting off the war, stressing that high energy prices “hurt Norway too” and noting that gas exports to Europe are up 8 percent year over year. “Europe sees that, and it sees that we are a good partner,” he said.

“There has not been a lot of questioning about whether it is fair to take advantage of this situation,” said Karin S. Thorburn, a finance professor at the Norwegian School of Economics. “People say, ‘We are just a price-taker.’ ”

Many Norwegians say they are green and good because they use clean energy to heat their homes and drive electric vehicles, merely selling fossil fuels for others to burn. “It’s very pervasive here, the idea that the bad guys are the ones that burn the fossil fuels,” Thorburn said. “They say, ‘They would burn it anyway. They would just buy it from someone else.’ ”

People in the Norwegian oil and gas industry, meanwhile, sound like lottery winners who are tired of calls from distant cousins who frankly should have saved. Some question why sensible Norway should bail out countries like Germany, which grew rich by relying on Russia’s cheap and abundant gas and oil.

In private, E.U. officials and diplomats concede that it is awkward for the bloc to have spent 2021 telling Norway not to drill in the arctic because of climate change, only to spend 2022 hounding them for discounts on fossil fuel. But the war has changed the game, one E.U. official said, speaking on the condition of anonymity to discuss private conversations. Calling peace-promoting, aid-delivering Norway a war profiteer “punches them where it hurts.” 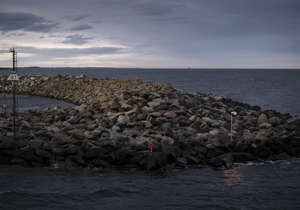 © Adrian Ohrn Johansen for The Washington Post A fisher can be seen at a ferry dock near Stavanger. The region has benefited from the discovery of offshore oil and the recent surge in prices.


In Stavanger, the heart of Norway’s oil and gas sector, the fallout from Russia’s war in Ukraine has brought a change of fortune.

The discovery of offshore oil in the late 1960s transformed this stretch of coastline from a fishing village into the type of place Elon Musk stops by for keynote, making Norway rich along the way. But concerns about climate change put a question mark over the city’s future — until the war.

“We went from zero to hero in a short time,” said Kolbjorn Andreassen, communications manager for Offshore Norge, a Stavanger-based industry association.

“People did not pay attention to our role in energy security. They just considered us emitters,” he said. Now, he added, “Europe realizes how much it actually needs us.”

High need and low supply have led to astronomical prices, a dynamic that he and others in Norway’s oil and gas sector see as a natural, neutral fact of life. 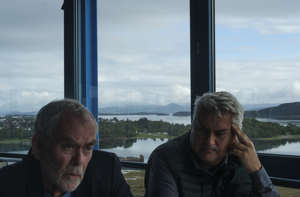 © Adrian Ohrn Johansen for The Washington Post Kolbjorn Andreassen and Bjorn Vidar Leroen are veterans of the Norwegian petroleum sector. 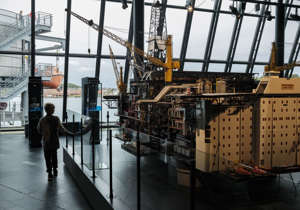 
“I have seen low prices and high prices over the decades,” said Frode Leversund, chief executive of Gassco, a major Norwegian pipeline operator that sends gas to Europe. For now, Leversund said, he is focused on delivering gas.

“The E.U. and the commission are complaining about the price, but this is a market-based price,” said Bjorn Vidar Leroen, an industry veteran and the author of a book on the history of the Troll gas field. “This is the price you have to pay today.”

The book, published in the 1990s, tells the story of the “bold brains” who discovered one of Norway’s major gas fields and decided to develop it sensibly, putting most of the earnings into a sovereign wealth fund.

A preface, written by NATO Secretary General Jens Stoltenberg, then Norway’s minister of industry and energy, predicted that strong, binding ties between buyers and sellers would keep gas flowing to Europe from Norway “for generations to come.”

But over the past 20 years, Europe liberalized gas markets, moving from long-term contracts between buyers and sellers toward spot pricing. The war in Ukraine sent the spot price soaring, leading to the current crunch.

Leroen has little sympathy for European buyers. “If they had just stuck to long-term contracts, the price would be lower,” he said.

Europe did not rush to Norway’s aid in 2014, when falling oil prices led to job losses and labor unrest, he said. “Who in Brussels said, ‘What can we do to help Norway?’ ” 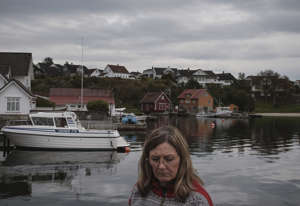 © Adrian Øhrn Johansen for The Washington Post Shopkeeper Ingunn Johannessen is worried about making it through the winter.

The conversation about war profiteering is playing out in parallel with a debate about the role of the sovereign wealth fund and what policymakers owe Norwegian citizens.

The government has put $2.3 billion dollars into lowering electricity prices, according to an estimate by Bruegel, a Brussels-based think tank, paying 90 percent of bills over a certain price threshold, among other measures.

But up the coast from Stavanger, not far from where pipelines carry gas to Europe, Ingunn Johannessen, a fifth-generation shopkeeper, is unplugging freezers and fretting about the winter ahead.

Since 1851, Johannessen’s family has run a small general store, selling food, fishing tackle and tools to villages along the Fjord. Johannessen has weathered ups and down on thin margins and made it through the pandemic intact. But the combination of higher prices for food and electricity is maddening.

“I am really pissed off about the electricity bill,” she said. 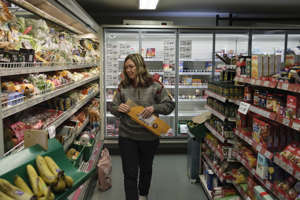 © Adrian Øhrn Johansen for The Washington Post Johannessen wants the Norwegian government to use its windfall to help Norwegians.


She said she, like everyone, is watching the war in Ukraine with alarm but also wonders whether the conflict alone is to blame for the hit to her business. “People can increase the cost for everything and say it is Putin’s fault,” she said.

The local government makes a lot of money off the nearby Gassco processing plant, she said, and could help the businesses who keep the community going. And she wants the Norwegian government to do more with its windfall.

The money, she said, “should go to the people who need it.”

Ingrid Liland, deputy leader for the Norwegian Greens, said the appeals to Norway’s sense of its own goodness appeared to be having an impact, pushing the government toward working more closely with Europe.

She also expected Norwegian companies to seek longer-term contracts, which would give the companies a predictable stream of revenue while allowing committed customers to lock in prices below current rates. Britain is reportedly exploring the idea.

Long-term contracts, however, could also hurt Norway’s climate goals. Liland said she hoped the government would show solidarity with Europe without sacrificing its climate targets. “We have history where Norway has taken an important active role in handling conflict,” she said. “We can take the role again.”