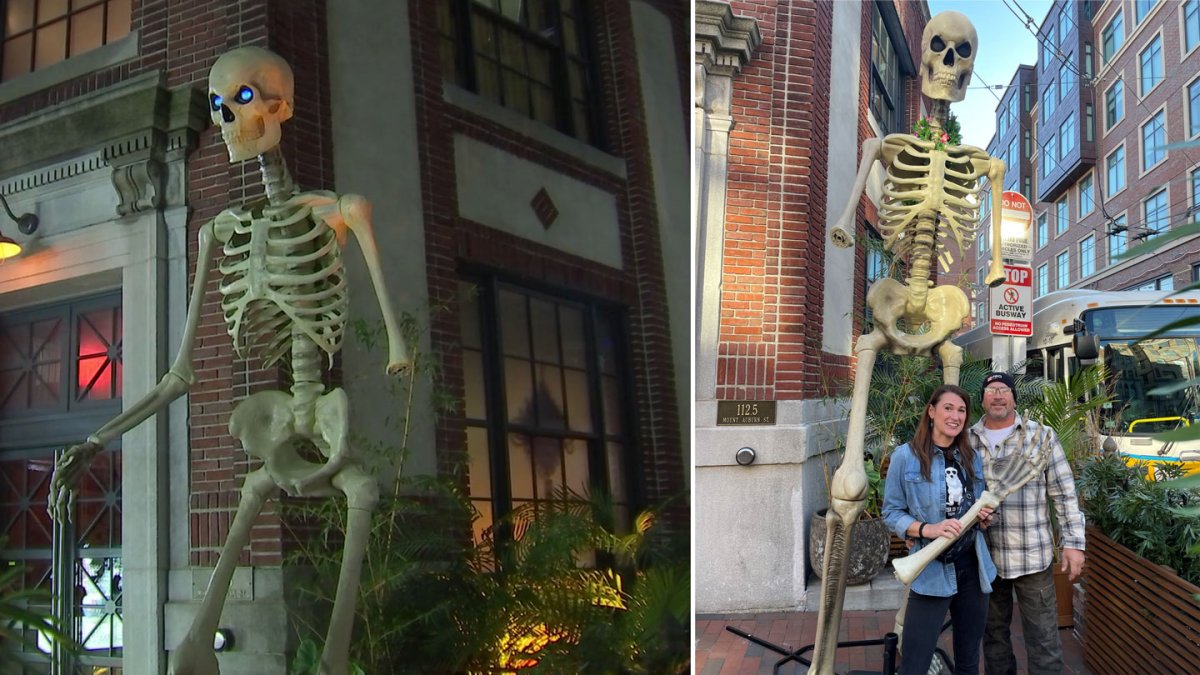 Call it an eerie coincidece or a Halloween miracle, but make no bones about it, this is one lucky restaurant.

The giant skeleton that’s standing outside of a new tiki bar and restaurant near Harvard University had one of its arms stolen last week. While the limb is still at large, the Halloween decoration is whole again, thanks to another person whose giant skeleton just happened to be destroyed in a wind storm around the same time.

Maria Bennes and her husband may no longer have their beloved skeleton, but they’re happy to have helped someone else, and the $100 reward doesn’t hurt, either.

“We just thought it was a nice way to let it live on,” Bennes said, adding, “Is that an oxymoron because it’s a skeleton?”

The restaurant, Cambridge’s Wusong Road, has been marking its first Halloween with the 12-foot-tall skeleton from Home Depot. The skeletons are hard to get — each store only carries one or two, and they’ve become coveted by Halloween lovers like Bennes, and Wusong Road owner Jason Doo.

“We were waiting at 6 a.m. in August,” he recalled. “There are giant skeleton scalpers.”

But two people were spotted on surveillance camera taking off with the arm after posing for a picture with it, and the restaurant released the video, asking for help getting it back.

Savannah Smith has some complex medical conditions and uses a wheelchair, but the nonprofit Magic Wheelchair stepped in to make sure she could enjoy this year’s Halloween festivities.

Meanwhile, Bennes was reeling from the loss of her own huge skeleton.

“I was crushed when he fell because I loved him so much,” she said.

Bennes and her family didn’t exactly have a name for the skeleton in its two years of service spooking their neighborhood in Millbury, but they sometimes called it Hank, she said, after their dog, which is also big and white with black eyes. The statue blew over in a wind storm last weekend, Bennes said.

The remnants of Hurricane Ian caused strong winds to blow across New England.

“The rib cage shattered,” she recalled, and while the Benneses thought about repurposing parts, like having the arms stick up out of the dirt, ultimately they decided it wouldn’t work.

Bennes’ husband saw news coverage about Wusong Road’s skeleton problem, but it wasn’t until the story popped up again on social media that she knew what she had to do, she said.

Not only did the Benneses bring the missing arm, they brought other spare parts that were still intact, in case more harm befalls Wusong Road’s skeleton.

Now, restaurant staff workers take the arms down every night and put them back up when Wusong Road opens back up for dinner, according to Doo. And he’s sending a $100 gift card to the Benneses for the reward.

Even though they live about 45 minutes away, Bennes said she and her husband definitely plan to come back and use it: “It looks like coolest bar!”