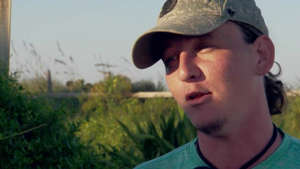 A New Smyrna Beach man took matters into his own hands to try to recover his stolen tools. He offered a small reward to anyone around town who could help.

He eventually got that help, as well as his things back from the alleged thief himself.

“I always watch the area where I live, as you can imagine. I’m a local. I don’t want anybody here more than anybody else does stealing things,” Ryan Stephens said.

Stephens was working on his bike Monday evening.

Before going to bed, he put his things in a toolbox and left them in the parking lot of his home.

But the next morning, he got a surprise.

“I opened my door to go to work and my stuff was just gone,” Stephens said.

Stuff worth a thousand dollars was hard to just let go. He remembered seeing someone suspicious circling through the neighborhood before his things were gone.

“I had a feeling about who it might be, but I needed to find out exactly who it was,” Stephens said.

He called New Smyrna Beach police and filed a report.

“The scariest part about the whole thing is that where they stole it from – if it was here, my son is asleep on the other side of the wall,” Stephens said. “I assumed my stuff’s not going to show back up, so I went out and spoke to people.”

He gave out his number and even offered a small reward for anyone who knew what happened.

Someone called later that night.

“My phone rang and the guy said $500 cash buys you all of your parts back and your equipment. And I told him ‘where do you want to meet?’ And he said the Harley Davidson dealership,” Stephens said.

When Ryan came to try to get his belongings back, he said officers were hiding behind one business waiting for the suspect to show up.

“We just said, ‘hey, are you here to talk to us?’ And he said ‘yeah.’ And I said, ‘where’s my stuff?’” Stephens said. “I think he realized he was kind of busted. He drops his head, and he takes off on his bike and police chased him down.”

When police caught the suspect, they arrested him.

“Luckily, nobody was injured. I got all my stuff back. It’s his mistake so he’s got to pay the price now,” Stephens said.

The suspect, Leonard Annarino, is facing several charges, including grand theft and dealing in stolen property.

CHECK OUT WESH:Stay in the know with the latest Orlando news, weather and sports. Get the top stories and all the scores from the team at WESH.