An Encino woman is begging for the return of her 3-year-old French bulldog Lala after she was stolen from her home during a burglary. The owner is offering a $15,000 reward, no questions asked.

Doorbell video shows three suspects running away from the home carrying the dog and bags of stolen goods. The owner said her home was ransacked, but her concern is with Lala as she needs medical attention daily.

“Please give me my dog bag because my dog really needs medication and then, if you don’t return her back probably she will die,” said the dog’s owner, Naomi. 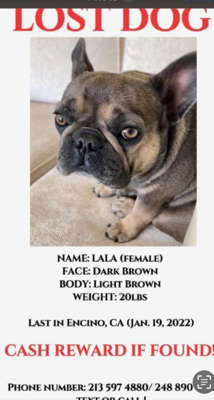 The owner says Lala is microchipped and registered.