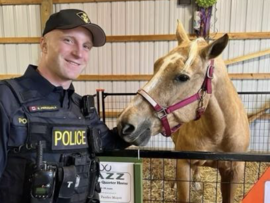 © Supplied OPP Const. Grzegorz Pierzchala was shot and killed by an assailant near Hagersville on Dec. 27, 2022.

Police have identified the officer shot and killed near Hagersville on Tuesday as 28-year-old OPP Const. Grzegorz Pierzchala.

Police have taken two suspects into custody after the young officer was killed when he responded to a call for a vehicle in a ditch at the intersection of Indian Line and Concession 14, west of Hagersville. Sources said police later were looking for suspects in a stolen pickup truck.

“It is with an extremely heavy heart that I regretfully advise that #OPP Provincial Constable Grzegorz Pierzchala was killed today while courageously serving in the line of duty,” tweeted OPP Commissioner Thomas Carrique. “ Our hearts are with his loved ones and all OPP members at this tragic time.”

The OPP had said officers were looking for Randall McKenzie, 25, described as Indigenous, 6-foot-2 and weighing154 pounds. Police also released the image of a female suspect, but did not provide further details about her identity. 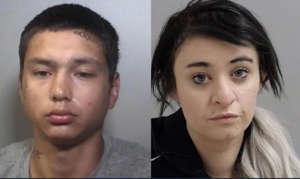 © OPP Police have taken Randall McKenzie, 25, and a female suspect into custody. They are wanted in connection with the shooting of OPP Const. Grzegorz Pierzchala. Police did not release details about the female suspect.


West Haldimand OPP has taken the lead on the investigation into the shooting of the officer, who had one year on the job. According to sources, one witness, who described up to five shots fired, said the driver had tattoos on his upper body.

Sources told The Toronto Sun that Pierzchala was shot in the chest and leg.

Police, meanwhile, had issued a shelter in place warning as officers conducted their search for the alleged killer. The OPP also offered a reward in the case.

Tuesday’s fatal shooting was the latest in a year which has seen several officers lose their lives.

Toronto Police lost one of their own when Const. Andrew Hong, 48, was ambushed on Sept. 12.

He was executed at a Tim Hortons in Mississauga while providing training to other officers. The shooter — Sean Petrie, 40 — left two others dead and two wounded in his rampage before being shot dead by cops in Hamilton.

Two South Simcoe Police officers — Const. Morgan Russell, 54, and Const. Devon Northrup, 33 — were shot and killed on Sept. 12 while responding to a domestic disturbance in Innisfil. Northrup was a six-year veteran assigned to the Community Mobilization and Engagement Unit. Morgan served for 33 years and was assigned to uniform patrol.

RCMP Const. Shaelyn Yang, a 31-year-old mental health and homeless outreach officer, was stabbed to death in mid-October when she and a City of Burnaby employee attempted to issue an eviction notice to a man who had been living in a tent at a local park.

An off-duty York Regional Police officer — Const. Travis Gillespie — was killed Sept. 14 in a head-on crash  in Markham. The deadly two-vehicle collision involving a white Honda Accord — driven by Gillespie — and a Porsche Cayenne occurred on Major Mackenzie Dr. E., west of Warden Ave., around 6 a.m.