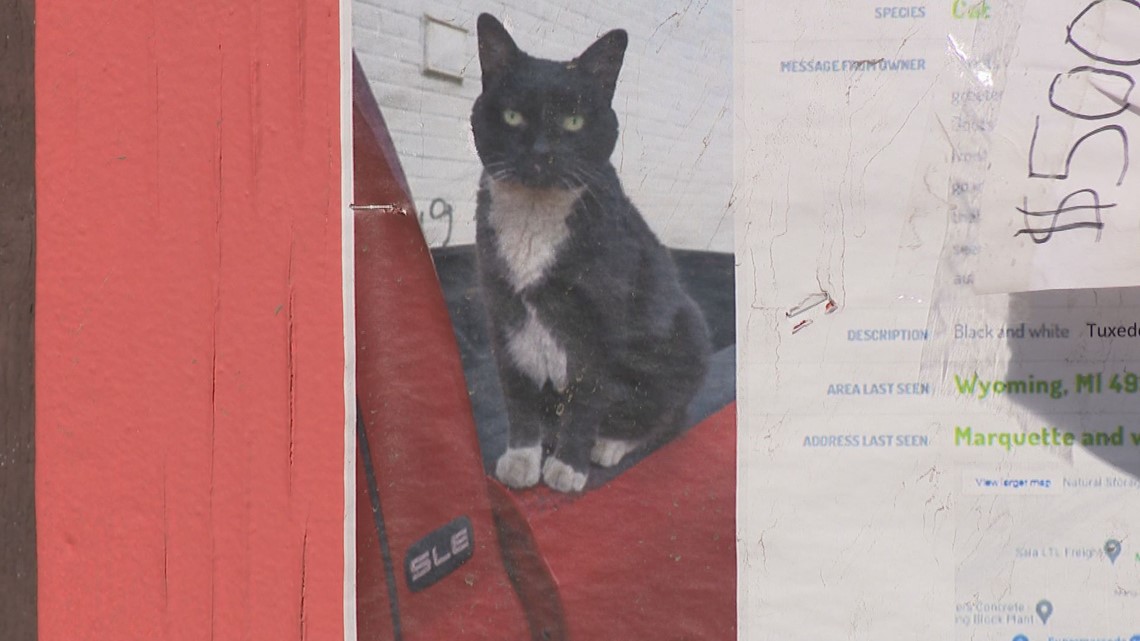 Boots has been like a mascot for Tracy DuBois’ auto parts store for 15 years. He caught a girl on camera taking Boots last month.

WYOMING, Mich. — Tracy DuBois was helping a customer at his store, South West Truck and Auto in Wyoming, last month while his store cat, Boots, was outside the door, waiting to come back inside.

“I took care of the customer, and I looked, and she wasn’t there,” said DuBois, “I thought, ‘that’s odd.’ She usually doesn’t do that. So, I started walking around the shop looking, calling, ‘Boots? Where are you, Boots?’ She was nowhere around.”

DuBois then looked at his security footage. He saw a teenage girl call out to Boots, pick her up and walk away with the cat.

DuBois said Boots was like a mascot at the store. She had lived there 15 years, and customers would interact with her as they shopped, and families often brought children to play with Boots while they were there.

He called police after seeing the security video, but says he was told they did not have enough information to locate the girl on the video.

However, the next day, DuBois spotted the girl walking past his shop once again. He confronted her about taking Boots.

He took down her name and information and gave it to Wyoming Police. Later, DuBois said Wyoming Police contact him, saying they spoke with the girl and her mother, who had released the cat at a local park, thinking it was a stray.

“I tried to get the police to investigate,” said DuBois, “They said nope, the case is closed. It just makes me feel like they’re not trying hard enough.”

Wyoming Police tell 13 ON YOUR SIDE the situation appears to be a misunderstanding, and the teenager thought the cat was a stray when she picked it up. Based on the explanation, it’s unlikely criminal charges will result.

The department says they hope DuBois is able to find his cat.

DuBois has searched the park for Books to no avail. He believes someone may have taken her home.

“If nobody got her, she would have found her way back here,” said DuBois, “It’s only four city blocks away, and she was a smart cat.”

He is now holding onto hope someone will return Boots to him, even offering a reward for her finding.

“If she died or something, then I would know that she died and I could be over it,” said DuBois, “But I just can’t seem to get over this, because I don’t know where she is.”

►Make it easy to keep up to date with more stories like this. Download the 13 ON YOUR SIDE app now.