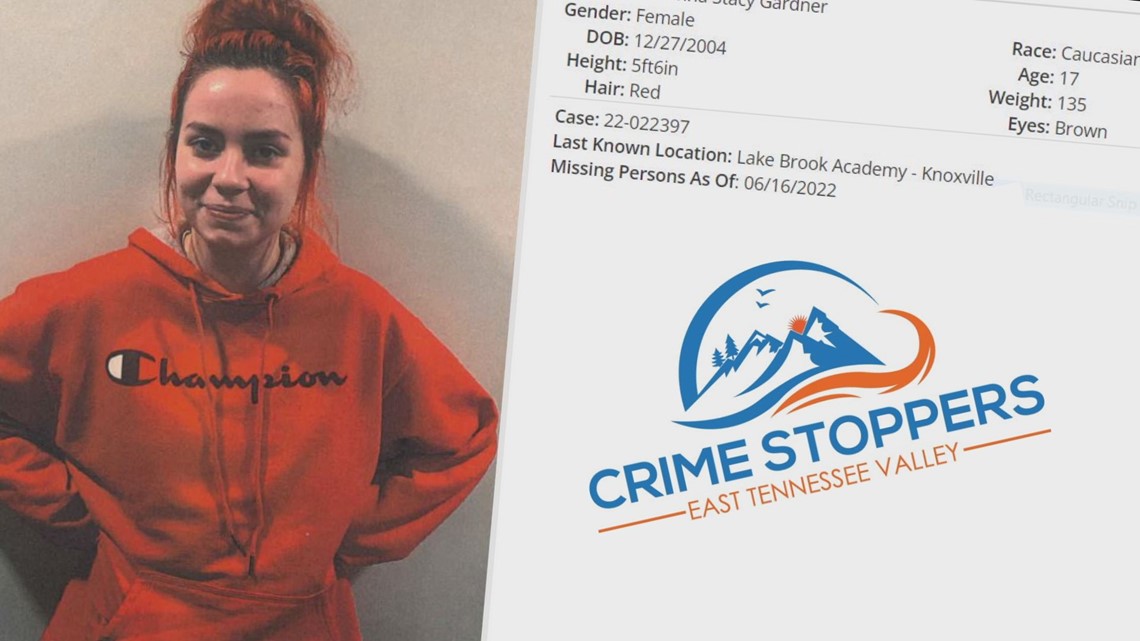 Breonna Gardner, 17, dismantled her ankle monitor, pulled the fire alarm and exited the doors of a Level 3 behavioral health facility more than a month ago.

KNOXVILLE, Tenn. — It’s been more than a month since 17-year-old Breonna Gardner ran away. She was living at a Level 3 behavioral health facility, called Lake Brook, in Knoxville when she dismantled her court-ordered ankle monitor, pulled the fire alarm and escaped. That was on June 16 at around 10:20 p.m.

At around 10:43 p.m., her mother, Amy Gardner, got a text from the Department of Children’s Services saying Breonna had run away and there was no other information available.

Since then, Amy’s been searching.

“As a parent, I’m out searching for her. I’m searching physically, posting online, begging the public to search. I’m going through her social media accounts, finding evidence, turning it over. I’m determined to find her,” Amy said.

In addition, the East Tennessee Valley Crime Stoppers have Breonna listed as a missing person. There’s a $1,000 reward for information that leads to her location.

Amy said a lot happened that led up to this point.

“It was the most significant day of my life,” Amy said.

Foster care experts and child advocates said the most important part of raising a child who was in the foster-care system is getting them plugged in with resources.

“It’s very important for us to make sure that the kid has the therapeutic interventions, but also the foster parent has trauma-informed care, to provide kind of parenting skills, interventions, redirection to the kiddos that come into their care,” Natasha Hayes said.

She is the clinical supervisor for foster care at Youth Villages, which is a nonprofit organization dedicated to helping emotionally and behaviorally troubled children and their families live safely and securely.

Amy said she believes she did all that and more.

“I sought out every avenue of care for them to recover from their traumatic past. I asked who the best childhood therapists were. I read every resource I could get my hands on. I was determined to advocate for only the best for them,” Amy said.

In 2016, Amy posted a photo on social media explaining how she used a tube of toothpaste to teach her oldest daughter an important lesson the night before Breonna began middle school.

It went viral on social media and was featured on news outlets throughout the country.

But, by 2017, when Breonna turned 12 years old, things started to shift within the family. Amy said her adoptive daughter started significantly struggling with her mental health. Amy said Breonna made threats to her, the dogs and her younger sister.

“After multiple incidents, the court system decided that they needed to step in,” Amy said.

Most people know that the Department of Children’s Services can bring children into state custody due to abuse and neglect. However, in rare cases, it can also bring children in if a severe mental health situation calls for it.

“That’s what happened in our case. There have never been any allegations of abuse or neglect in our home,” Amy said. “But, the state did take temporary physical custody of Breonna to place her in a mental health facility that was only open to children in state custody.”

Breonna remained in state custody for around two years. The Gardner family visited her weekly during that time, Amy said.

When Breonna was released back to the family full-time, she said she started thriving.

“She accomplished things, dreams that we thought would never come true,” Amy said. “She got her driving permit and her driver’s license and she wanted a part-time job and she achieved all of those things.”

All that success fell when Breonna stopped taking her psychiatric medications in 2021. Amy said her daughter stole a car and ran away, which resulted in police arresting her.

When Breonna fled the facility, she had no money, no identification and no transportation.

The Knoxville Police Department said there are several agencies working to locate her. It believes she is in the McMinn County area.

In a statement, the department said, “Gardner, who is also in DCS custody, has not yet been located and in all likelihood is avoiding law enforcement. There are general concerns for her safety based on her lack of funds, transportation or place to stay. However, there is not evidence at this point to suggest that she has been victimized or is a danger to anyone else. There is also not anything to suggest that she is in any kind of imminent danger.”

However, Amy said she fears something bad could happen to her daughter, especially in a state of vulnerability.

“This is not some teen angst, runaway story. This is a 17-year-old juvenile without psychotropic medications, without identification, without money and at risk for being trafficked,” Amy said.

Throughout the past five years of ups and downs, Amy said her love for Breonna has not waivered. She wants to see her daughter found safe and get help.

Polk County Juvenile Court has issued an attachment for Breonna Gardner to appear before the court. East Tennessee Valley Crime Stoppers, in conjunction with Knoxville Police, are offering cash rewards for tips that help bring Breonna to safety.

If you have any information on the whereabouts of Breonna Gardner, please send a tip to East Tennessee Valley Crime Stoppers. Tipsters may remain anonymous and could be rewarded with up to $1,000. People can also call them at 865-215-7165.