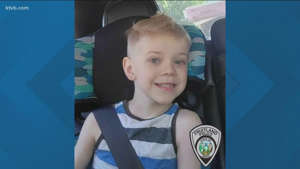 Editor’s note: The live briefing has concluded. The recording will be posted shortly.

What happened to Michael Joseph Vaughan? With just five days to go before the one-year anniversary of the day the boy, then 5 years old, disappeared from his family’s neighborhood in Fruitland, Michael’s family and the community still wait for answers.

Ahead of the anniversary, Fruitland Police plan to brief local news media about the continuing investigation. The briefing will be livestreamed here on KTVB.COM and on the KTVB YouTube channel.

Authorities continue to encourage people to share this poster about Michael hosted by the Idaho Missing Persons Clearinghouse. As of late June, the reward for Michael’s safe return stood at more than $52,000.

Fruitland Police Chief JD Huff said earlier in June that investigators had many potential persons of interest. Fruitland Police are working with the FBI and Idaho State Police in what’s now considered a criminal investigation.

Anyone with information is asked to contact the Fruitland Police Department at 208-642-6006, extension 0, or email the department’s tip line at findmichael@fruitland.org.

This story will be updated after Friday’s briefing.