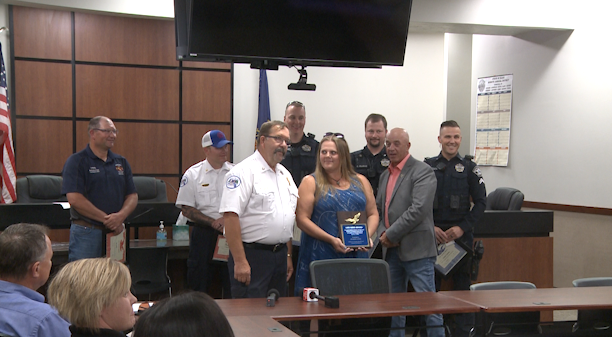 RIGBY, Idaho (KIFI) – It all started as a regular day for Aubree Ours when she started on her route to deliver meals to the seniors in the Meals On Wheels program except when she pulled up onto a home on Rigby’s 400 N street, something would be different.

“I actually did not see any smoke or fire. I smelt something kind of like sweet that was burning. So my first thought was that, ‘okay, he’s probably got something on the stove burning, and I need to make sure he knows,’ and knocked on his door and I heard him calling for help. Opened the door and was it was just a wall of smoke,” Ours says.

She adds that after she opened the door, “I didn’t see any flames. I just seen smoke. So first instinct, look at the kitchen, what’s burning on the stove? And then he was able to tell me it was in his bedroom, and he had already got the door closed. And so I ran back out of the house, got my phone and called for help, and then tried to get him out of the house.”

Ours, like many of us if we approached a similar scene, would try to do everything we could to help out. Ours says once first responders arrived, she quickly directed them to the man who was still inside the home.

Jared Giannini and Andrew Cleverly were among the first responders who arrived on scene.

Cleverly shares how the call to action came in.

“Originally, when the call came in, we were told that there was an individual in the house and there was active flames coming from the home and somebody was trying to get him out. And that that call is the one that you kind of dread. And then you just go in and hope that everything turns out the best. We can not think about it in the moment,” Cleverly said.

Giannini added, “All of us got there about the same time. We all pulled up pretty close to each other. And yet we got told structure fire, guys still trapped inside. So we just go there as fast you can and try to get there and do what you can to help them get out.”

Cleverly is a deputy for the Jefferson County Sherriff’s office, and Giannini is a member of the Central Fire District and EMT team.

Giannini says once they entered the home, it was all about making sure the man inside was ok.

“He was laying on the floor. Jim Kelly, the other firefighter, and try to pick him up and get him to walk out. He couldn’t walk out, so he fell back down on the ground and all five of us picked him up and started dragging him out.”

Cleverly says they had to clear a path to make sure the exit would be a safe one.

Giannini and Cleverly say as first responders jumping into the home that was a blaze was just another day on the job.

“Everybody says it’s kind of cliche. I got into this job to to save people. And as you know, an officer says, they always think, ‘oh, that’s all he does is cousin puts people over.’ But we get into this job so we can help people and we do it to help people. So when we are able to be in a situation like that, it is it’s an incredible, incredible thing to be able to save lives and there’s nothing like it,” Cleverly said.

“That’s why I became a firefighter. EMT Just help people, save people. And so, you know, just the way I look at it is, you know, a day on the job just run in and grab something and bring them out. You know, we don’t do it all the time, but that’s just the way I thought and it’s just just doing my job,” Giannini added.

While the first responders and Ours didn’t do what they did for any recognition, they said the recognition for their efforts was a welcome surprise.

“It’s cool. It makes me nervous. So I’m glad I was there to help him. So and I hope he’s okay. That’s my biggest thing,” Ours said on receiving the award.

A sentiment both Cleverly and Giannini echoed.

“It’s an honor and so awesome feeling to be able to save somebody and for them to be able to live and talk about it. He was laughing in the ambulance when we were taken to the hospital afterwards, and so he was in really good spirits,” Giannini said.

“It’s just something nice to be able to do. We go in a lot of crappy cars and turn out bad and this one turned out good. And so to get an award for it, feels good,” Giannini added.