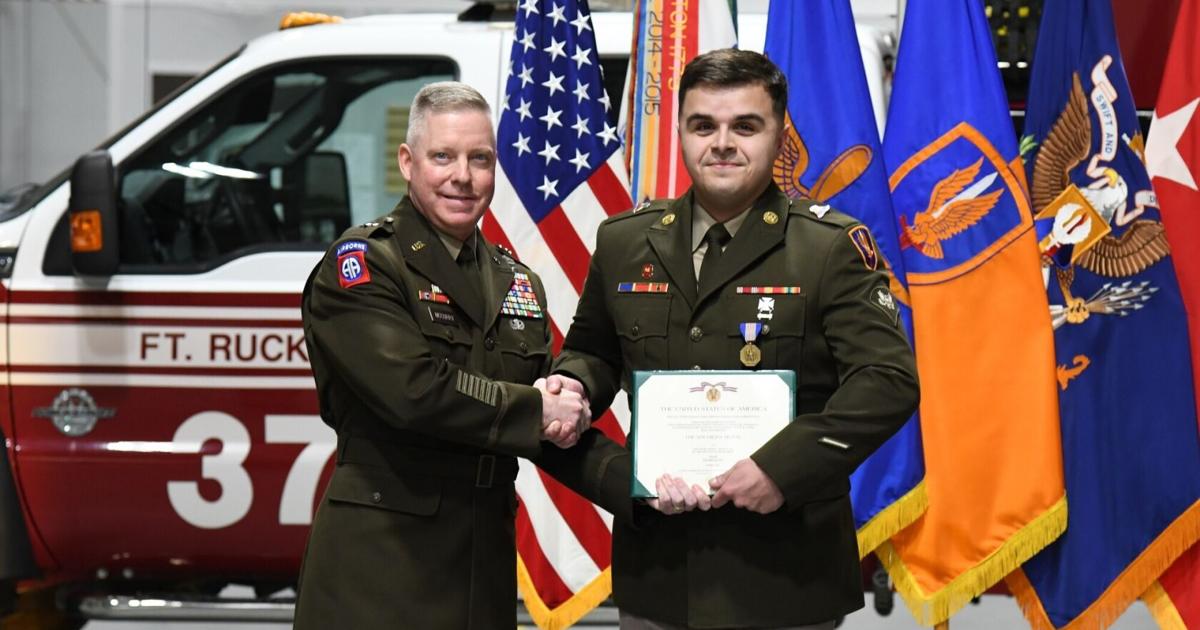 FORT RUCKER — Spc. Kevin L. Killens Jr., a Fort Rucker firefighter with the 6th Military Police Detachment, was awarded the Soldier’s Medal Thursday, in a ceremony at Yano Hall, for risking his life to save the life of a resident in the local Wiregrass community.

On May 16, 2021, then a Private 1st Class, Killens had just completed a 12-hour volunteer shift providing emergency medical support to the community of Daleville. While returning from an ambulance run, driving along County Road 109 near Level Plains, he and his partner from the Daleville Rescue Squad, Zachary Smith, saw smoke near a tree line and decided to drive in that direction to find out its source.

Upon seeing the structural fire, they quickly notified Daleville dispatch. Killens could see the flames coming through windows and the roof, and heard screams coming from inside. With no first responders on the scene yet, Killens and his partner chose to intervene.

They immediately ran through the surrounding debris field and entered the building from the back. Inside they found a man with severe burns on his body. They dragged him out of the building 100 yards away to safety.

They administered lifesaving aid, wrapping the man’s hands and giving him oxygen. They contacted the Alabama Stroke Trauma Center, and immediately rushed the man to the nearest hospital in Dothan, for treatment. The man was later airlifted for further care.

The timing of Killens’ arrival on scene and intervention was critical. Killens and his partner were able to push their emotions aside that day, stay focused on the task at hand, and help give the resident a fighting chance of staying alive.

For his courageous actions in the face of danger that day, Killens was awarded the Soldier’s Medal.

McCurry said to earn the Soldier’s Medal, a person has to live up to the Soldier’s Creed and the Oath of Enlistment, which Killens has done.

Killens, who has been volunteering with the Daleville Fire and Rescue on the weekends for three years in addition to serving as a firefighter on post, said one of the reasons he joined the Army was to help others.

“I appreciate that the Army gave me the skillset and the training to really be able to handle those stressful situations and know, hey, I can rely on that, and then just keep my mind in the zone,” Killens said.

“It turned out to be a big success, thank God. We did what we could to do good for others,” Killens said.

Killens said he appreciated the AIT soldiers who helped with preparing for the ceremony, and his family for being present.

He was also grateful for his partner that day of the incident.

“I had a great man I was working with, Zach Smith, and we kept each other safe. We ran a lot of hours together,” he said. “He was my right-hand guy. He always had my back, and I always had his. I’m just glad in a situation like that I had him by my side.”

The Soldier’s Medal was established by an act of Congress in 1926. It is awarded to any person of the Armed Forces of the United States or of a friendly foreign nation who, while serving in any capacity with the Army of the United States, distinguished themselves by heroism not involving actual conflict with an enemy.

It represents the same degree of heroism as that of the Distinguished Flying Cross. The soldier’s action must have involved personal hazard or danger while voluntarily risking their own life.