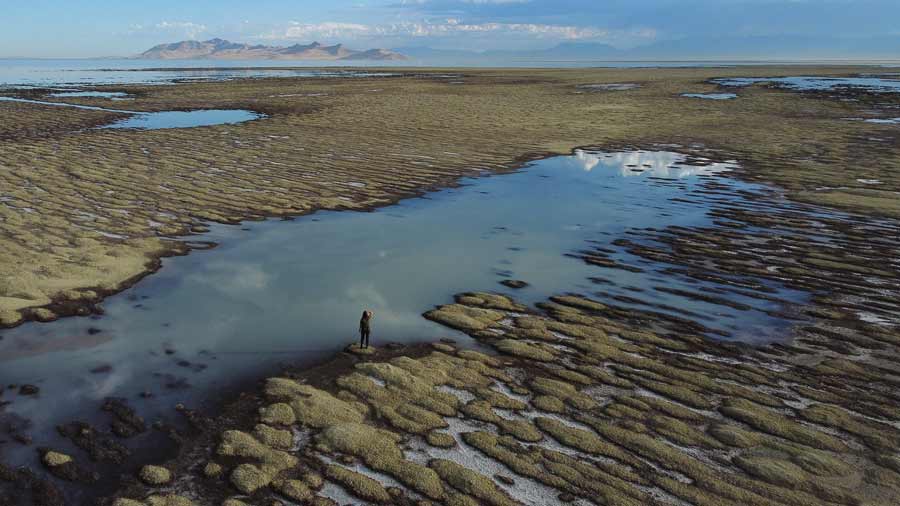 (CNN) — The Great Salt Lake in Utah is facing “unprecedented danger,” experts say, as it has fallen to an alarmingly low level amid a climate change-fueled megadrought that’s tightening its grip in the West.

Less than two weeks away from Utah’s 2023 legislative session, nearly three dozen scientists and conservationists released a dire report that calls on the state’s lawmakers to take “emergency measures” to save the Great Salt Lake before drains to nil.

Without a “dramatic increase” in inflow by 2024, experts warn the lake is set to disappear in the next five years.

“Its disappearance could cause immense damage to Utah’s public health, environment, and economy,” the authors wrote in the report. “The choices we make over the next few months will affect our state and ecosystems throughout the West for decades to come.”

The Great Salt Lake, plagued by excessive water use and a worsening climate crisis, has dropped to record-low levels two years in a row. The lake is now 19 feet below its natural average level and has entered “uncharted territory” after losing 73% of its water and exposing 60% of its lakebed, the report notes.

“The lake’s ecosystem is not only on the edge of collapse. It is collapsing,” Benjamin Abbott, a professor of ecology at Brigham Young University and lead author of the report, told CNN. “It’s honestly jaw-dropping and totally disarming to see how much of the lake is gone. The lake is mostly lakebed right now.”

With the climate getting hotter and drier, many lakes across the West will only see more evaporation, more demand for water, and just ultimate decline in levels. The grim climate reality already unfolding in the Great Salt Lake, Abbott said, is a “microcosm” of what is happening or is set to happen around the world on a warming planet.

“This is a bellwether for what’s going on in the larger river basins,” he said. “We need to lay out some very clear language about where we’re headed.”

The lake needs an additional 1 million acre-feet of water per year to reverse the decline, the report states. Doing so would up its average inflow to roughly 2.5 million acre-feet per year. (An acre-foot is the amount of water that would cover 1 acre of land a foot deep — roughly 326,000 gallons.)

Abbott said lawmakers need to take advantage of the good winter precipitation. As of Tuesday, snowpack in Utah was running at 170% of average.

“This is really a huge opportunity, but that actually raises the stakes for getting the short-term policies,” Abbott said. “There’s a possibility that we have all of this water and very little of it gets to the lake. We could instead just hold it in reservoirs, divert it and use it for kind of business-as-usual in the coming year — and that would be a huge missed opportunity.”

The report’s authors are calling on the governor’s office to declare a state of emergency, or at the very least, implement emergency water conservation measures that would not only reduce water use but ensure that the water makes it to the lake to replenish it — a huge task given that water planning and allocation for the state takes place in February and March.

The authors also called on the legislature to support the efforts while simultaneously putting in place longer-term solutions that would allow reduction in water use. If the drought persists in the West, as climate scientists suspect it will, reaching a stable level of inflow would require water use cuts of up to 50% around the Great Salt Lake watershed.

The impacts are widespread. The lake’s decline threatens critical habitat for endangered species as well as the state’s local economy. From the mineral industry to agriculture and recreation, the Great Salt Lake contributes $1.3 billion to the annual economy, according to a state assessment. If the lake continues to dry up, the economic toll would range from $1.7 billion to $2.2 billion each year.

The rapid drying of the lakebed also exposes harmful dust that could harm human health. Terminal lakes, like the Great Salt Lake, are ones where water can flow into but not out of the basin. And when strong winds blow over a drying lakebed, they kick up tiny particles that can be inhaled and damage the lungs and exacerbate other respiratory illness. These pollutants have been linked to health complications such as asthma, heart disease and chronic bronchitis.

While officials have discussed different strategies to increase the lake’s levels — including building pipelines, using cloud-seeding technology or even groundwater extraction — the report’s authors urge lawmakers to instead focus on ramping up conservation efforts, noting it is the “most cost-effective and resilient response” to restore the lake.

“We really encourage everyone from an individual water user up to the governor’s office and the federal government to focus on conservation,” Abbott said. “That is the only way that we can get enough water to the Great Salt Lake in time to save it.”