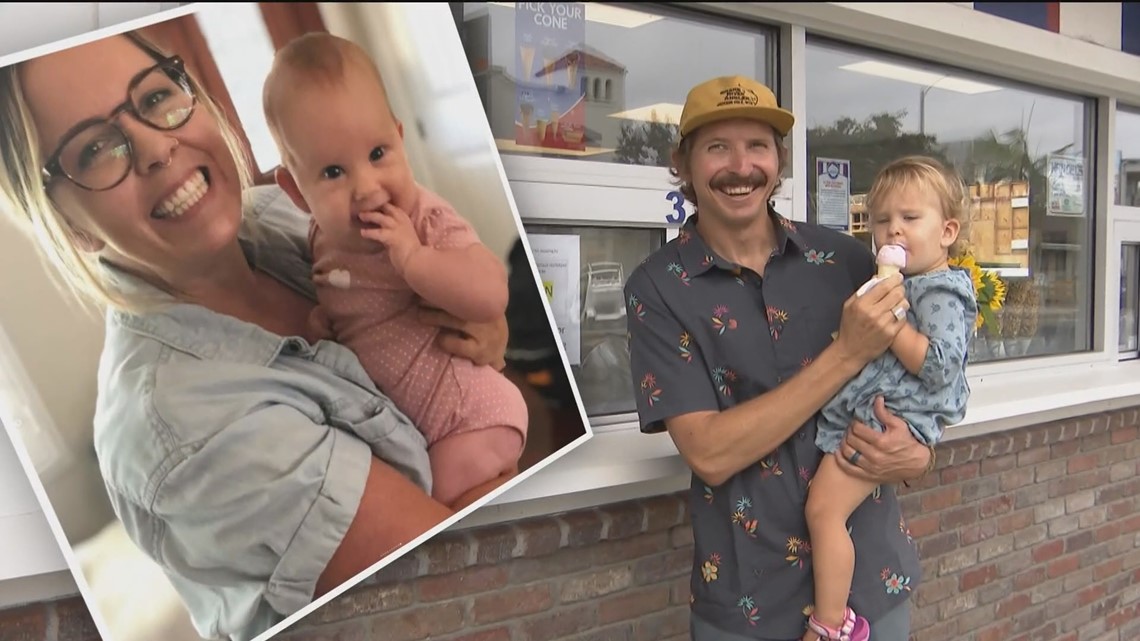 The infant’s mother was killed by an SUV while riding her e-bike on August 7th in Carlsbad.

CARLSBAD, Calif. — Handel’s Homemade Ice Cream is hosting a fundraiser for a Carlsbad mother who was killed while riding her bike with her baby. The event takes place on Tuesday, October 18th from 11 am to 10 pm at 2825 State Street in Carlsbad.

In this Zevely Zone, I share how the proceeds will help the mother’s child and her firefighter husband who is now a single parent. The tragedy took place at the intersection of Basswood Avenue and Valley Street on August 7th near Carlsbad High School.

The fatal crash may have happened in Carlsbad but the family that lost so much is hoping there are lessons to be learned by every San Diegan. “She was just a lover, she loved people, she loved life, she loved our family,” said her husband, Bob Embree.

Christine Embree was on a neighborhood bike ride with her 16-month-old daughter Delilah when they were hit by a Toyota 4Runner. “I cry every day, absolutely. There is not a day that’s gone by that I don’t cry; I miss my wife tremendously. She was my best friend,” said Bob who is a firefighter paramedic with the Orange County Fire Department.

The crash happened at a four way stop. Although the crash is still under investigation, police say the 42-year old driver of the SUV was not under the influence of alcohol.

Within a two week stretch, Carlsbad had two fatal bike crashes which lead to a public safety campaign. “We have a little bumper sticker that says slow down and save lives,” said Bob. “It’s all about public safety. I don’t want anyone to go through what I am going through, what my daughter is going to go through.”

Bob hopes the city will make traffic calming changes such as speed bumps and roundabouts and he’s received support from cycling advocates.

“Drivers don’t want to hit us, when we are out there on our bike, they will do anything they can to avoid hitting us,” said Pete Penseyres who is a certified bicycling instructor. Pete says multiple classes are available to cyclists, e-bike riders and drivers of vehicles on this website.

Along with teaching safety classes for the San Diego County Bicycle Coalition, Pete Penseyres has reviewed hundreds of collisions between cars and bikes. “The drivers who hit cyclists always say one of two things, they said I never saw them, or I didn’t see them in time to avoid them,” said Pete.

Handel’s Homemade Ice Cream in Carlsbad is hosting a memorial fundraiser for the Embree family on Tuesday, October 18th. “We heard about what happened and this was just someone in our community that was suffering, and we have a way to help,” said Jen Vu. On Tuesday between 11 am and 10 pm every dollar you spend will fund Delilah’s future. “All of the proceeds are going to the family. This was something that was engineered by our owners and that was the commitment,” said Jen.

Bob says he never asked for Handel’s help, but he appreciates their support. “Through tragedy you are seeing people step forward and you are really seeing the good in mankind and the good in humanity and I am very thankful of that,” said Bob. The firefighter says his wife would want two things; take care of her baby and prevent future tragedies. “My goal is with her loss of life is that if we can save one other life, I think that would make her happy and that would put a smile on her face,” said Bob.

Something tells me, Christine would have smiled at what happened next. Delilah enjoyed her first taste of ice cream. “Delilah look, ice cream,” said her dad. “It’s a winner yeah she likes it.”

RELATED: Loved ones speak out after Carlsbad mother killed in e-bike crash

The Memorial Fundraiser takes place on Tuesday, October 18th from 11 am to 10 pm at Handel’s Homemade Ice Cream located at 2825 State Street in Carlsbad.

For a link to the family’s GoFundMe page click here.