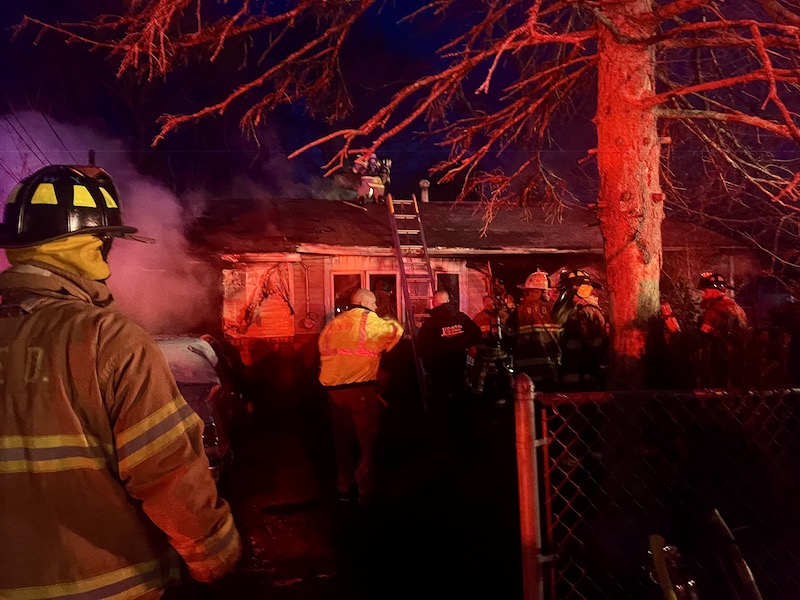 The room was dark. The air was hot as a furnace and thick with smoke. A resident of the house on Doris Avenue, where a fire broke out late Friday afternoon, was led to safety by police officers, who were first on the scene. He told them another resident was still inside in a room at the back of the house.

The officers raced to the back of the house, where the flames had not yet reached. They were confronted with heat and smoke and could not enter through the open window.

Riverhead Fire Department arrived and some of the firefighters raced to the back of the house when they heard there was a resident inside.

For Berry, 26, a seven-year RFD veteran, yesterday’s save was his first. Asked what when through his mind before he climbed through the window, Berry said in an interview today that, in a situation like that, “your mind empties and your training kicks in and you just remember everything you’ve done in training and just get the job done.”

“It’s not something you really think about. That’s why you train so much,” Berry said.

He was reluctant to take credit for the save, which he said was a group effort.

First Assistant Chief JR Renten said he’s proud of Berry and all the volunteer firefighters who answered the call yesterday. Their fast action saved two lives and knocked down a fire that was destroying the modest ranch-style home.

“Everybody involved did a good job and we were able to get him out,” Renten said.

“It was everybody. Second Assistant Chief Pete Kurzyna — we got together and knew what we needed. Flanders (fire department) came to the scene. Ridge (fire department) stood by at our headquarters. Ridge answered a couple of our automatic alarms while we were at the scene,” the chief said.

“We had the trucks in the right place, the guys stretching the lines. Everybody knew their jobs,” he said. “We’re really big on training.”

In all, there were about 80 first responders at the scene, Renten said, including police and Riverhead Volunteer Ambulance Corps.

“It’s a good feeling,” the chief said. “You don’t think about it till all is said and done.”

The survival of local journalism depends on your support.
We are a small family-owned operation. You rely on us to stay informed, and we depend on you to make our work possible. Just a few dollars can help us continue to bring this important service to our community.
Support RiverheadLOCAL today.