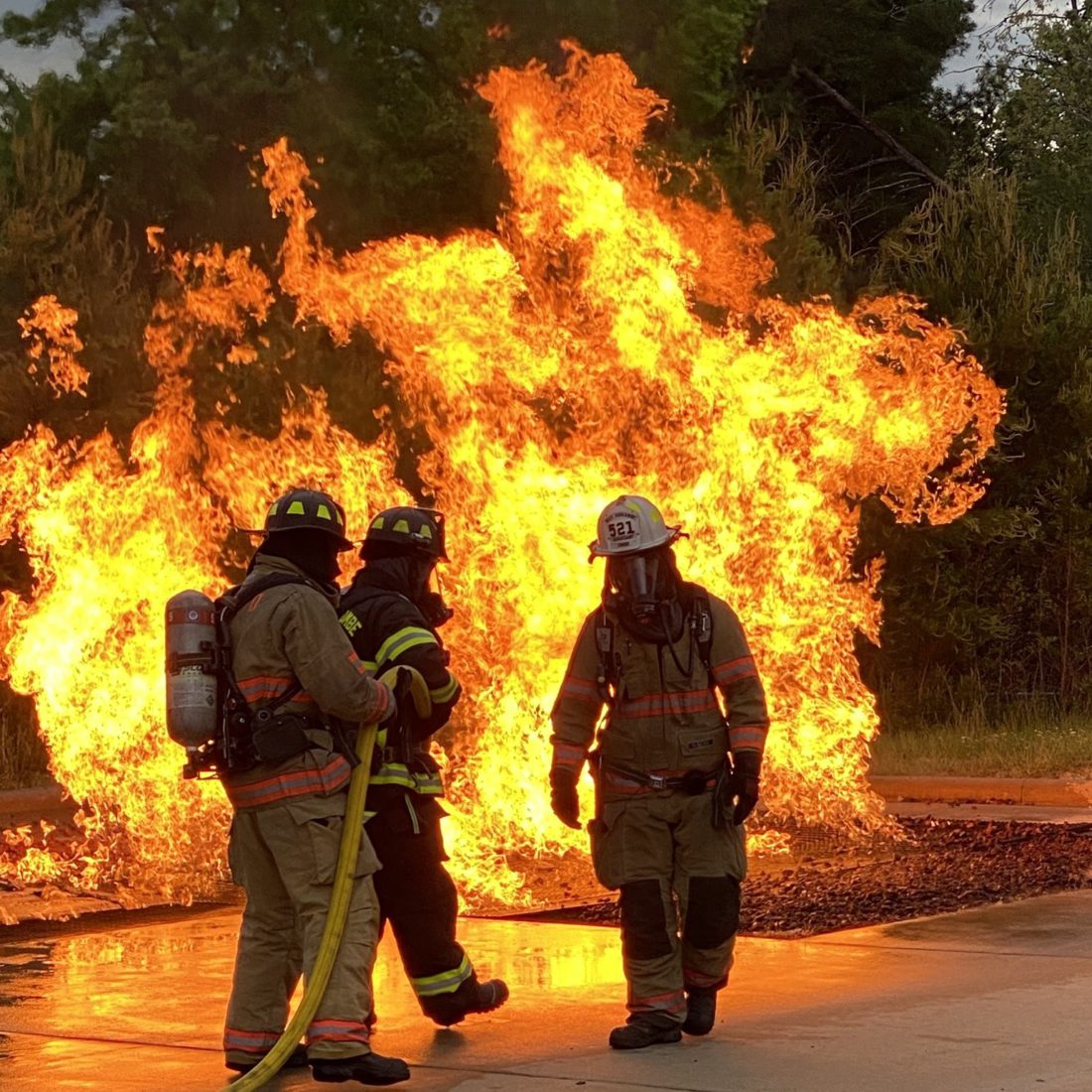 Jeff Cole grew up in the West Buncombe Fire Department.

His grandfather started volunteering with the department shortly after a small group of Lions Club members founded it in 1959. His father and uncle spent years as volunteer firefighters. His mother has been a member of the ladies auxiliary since the late 1960s.

“I went on calls with my papaw or my dad, or went to calls with my mom — helping with soda, tea, coffee, crackers and sandwiches — for as long as I can remember,” he says.

But such stories are increasingly rare. West Buncombe and other local departments are finding it tough to recruit and retain volunteers, once the backbone of community firefighting.

Specific data are hard to come by, but the Raleigh-based N.C. Association of Fire Chiefs estimates the number of volunteers has decreased by about 11% each year in recent years. “If departments get two volunteers a month that come through the door, they’re doing well,” says Wesley Hutchins, the group’s executive director.

Even Cole’s own sons have no interest in continuing the family tradition. “I can’t blame them,” he says, noting the job is harder than ever and requires substantially more training than it did in his father’s and grandfather’s day. And of course, volunteer work doesn’t pay.

As a result of the shortage, local departments have had to create more paid positions to keep up with National Fire Protection Association standards for staffing levels. To take two examples from this year alone, the Buncombe County Board of Commissioners approved a 10% tax increase for the Barnardsville Fire District to add paid staff, and Jackson County commissioners added about $900,000 in funding for eight permanent positions for the Sylva Fire Department.

Chief Anthony Penland of the Swannanoa Fire Department says his force had just three paid positions when he joined in 1990, with volunteers accounting for the rest. Today, the department has 13 paid positions and four or five volunteers.

“You’re looking at anywhere from 18 to 20 people needed to do all the functions that you may have to do on a structure fire,” Penland explains. “We hope that volunteers would supplement our paid staff and we’d be able to have that number. But we’re not meeting that right now.”

As a result, Swannanoa often has to rely on help from other area departments when dealing with structure fires or other major emergencies. Similarly, Penland’s department offers aid to departments that lack enough volunteers.

West Buncombe Chief Dennis Fagnant says when he started with the department 15 years ago, it had three paid positions per shift. Today, it has nine full-time and two part-time paid staff per shift.  But he emphasizes that the need for volunteers remains critical.

“It’s not uncommon at all for West Buncombe to have two or three, even four calls going on at the very same time, so that becomes difficult to handle without volunteers,” he says.

Center of the community

Hutchins with the N.C. Association of Fire Chiefs remembers joining his local fire department with 15 of his friends in 1975.

“We were volunteers and we were proud of it,” he says. “Now we’re getting folks moving in from all over the country, and they just don’t understand the volunteer fire department aspect of it.”

Observers agree the changing nature of people’s lives, particularly in fast-growing areas like Buncombe County, is perhaps the biggest culprit in the volunteer firefighter shortage.

In the past, says Fagnant, it was common for people to live and work in the same small town they grew up in, with the fire department serving as the center of the community.

“If there was a fire or anything that happened during the day, you were already in the community, and likely your boss also volunteered in the fire department,” Fagnant says. “So you were able to leave, answer a call and go back to work. That’s not true whatsoever now. During working hours, it’s just not feasible.”

Additionally, people increasingly live in households in which both spouses work full time and have to juggle child care and other family responsibilities. Others have to take on second jobs to make ends meet.

All that makes the erratic schedule and huge time commitment of a volunteer firefighter — including hundreds of hours of training and certification before ever actually fighting a fire — a deal breaker for most people.

That hasn’t been the case for Vlad Stepanov, who has volunteered with the West Buncombe Department for the past year and a half. But he admits balancing his volunteer duties and training requirements with a full-time job and a wife and three daughters has been challenging. Last year, he even used vacation time to get in several days of uninterrupted training.

“It would be even harder if you didn’t have a spouse that was supportive,” he says. “My wife has been very understanding.”

Stepanov says he was attracted to firefighting after he finished college because he wanted to learn some new, hands-on skills and get high-quality training. “Plus, I had a passion for firefighting,” he says.

Cole shares that passion, even after all these years.

“It’s still the thrill of just being able to get in there and face the devil and back it off a little bit,” Cole explains. “The fact you can overcome such a destructive force and get somebody their house back or save somebody’s life is very satisfying.”

Last year, Swannanoa Chief Penland taught the county’s first high school fire academy at Owen High School. Six students completed 16 of the 20 certification courses needed to become a firefighter in North Carolina. One of those students now volunteers with Swannanoa, another with the Riceville Fire Department.

“We will potentially get another one as soon as that individual turns 18,” Penland says. “So that’s a good start right there.”

The program proved so successful it will be expanded to Asheville High School this school year, with the Asheville Fire Department teaching the courses.

Under the Volunteer Workforce Solutions campaign supported by that grant, the NCAFC provides marketing material, training and support. Participating departments join in leadership workshops and learn how to develop recruitment campaigns specific to their communities. West Buncombe’s Cole says the department has added several volunteers through the program.

Cole recalls a different grant West Buncombe had a few years ago that allowed the department to pay volunteers $20 each time they responded to a call. “That was helpful, but it didn’t really make that big of a difference as far as call response,” he says. “So it’s not necessarily getting paid that makes the difference.”

Stepanov says flexibility may be one key to getting more recruits. West Buncombe’s fire academies allow volunteers to complete technical courses by training one night a week for about a year, rather than the usual schedule of compressing training into a few months.

“I can’t quit my job and go to take those classes,” Stepanov says. “But the way West Buncombe is doing it, they’re allowing for people to have a job, have a family and just do it one night a week. If some other departments would do something like that, I think they could get their volunteers a little more excited about it.”

Fagnant thinks that ultimately one solution may simply be raising awareness that volunteers remain a vital part of fire service for the majority of local departments.

“When you talk to a new recruit that comes in, one of the common statements is: ‘I didn’t know they still had volunteers,’” he says. “So a lot of people just don’t understand we have a need for volunteers. If this is something you want to do, reach out.”