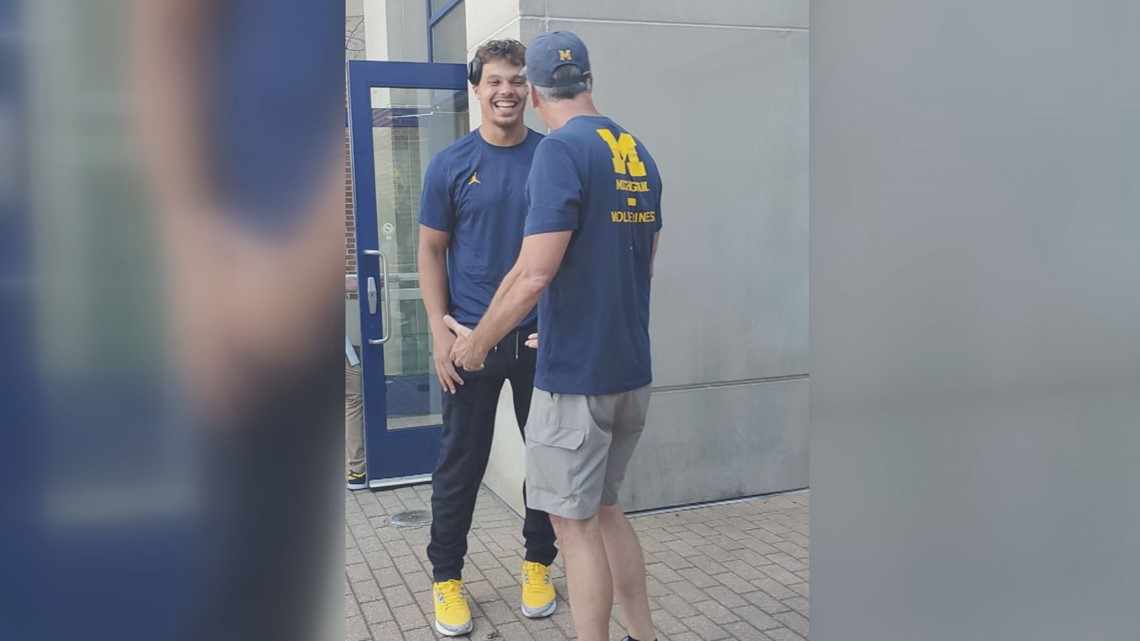 Just minutes after the All home was engulfed in flames, Tom Broyles and the Richmond, Indiana fire department came to help.

ANN ARBOR, Mich. — Michigan Tight End Erick All has a knack for making big plays. He scored the game-winning touchdown against Penn State in 2021, and recorded a touchdown in Michigan’s win over Iowa in the 2021 Big Ten Championship game.

“We get the ball we’re gonna make the most of it,” All said.

“I thought he was dead,” Erick’s dad Erick All, Sr. said.

21 years ago, when All was just a baby, his childhood Indiana home was covered in flames.

“The house went up into flames,” Erick said. “My dad couldn’t really get into the room and save me.”

Erick’s father was thinking of the worst-case scenario.

“I remember seeing orange flames coming from under the bedroom door and me opening the door and there’s a flame there,” Erick All, Sr. said. “And I couldn’t get to my son.

Just minutes after the All home was engulfed in flames, Tom Broyles and the Richmond, Indiana fire department came to help.

“That’s the first time that I ever had had to you know attempt to rescue someone,” Broyles said.

Broyles looked all over.

“It was hot you couldn’t see anything,” Broyles said.

But eventually, Tom found him, and Erick was rescued.

“It took a minute to find him,” Broyles said.

That minute was the longest Minute of the All family’s life.

“It was pretty terrifying,” Erick’s mom Kelly All said. “It seemed like it took forever and it was just very traumatic.”

Erick wasn’t breathing after he was rescued from the burning house.

“They gave me CPR and brought me back to life,” Erick said. “And here I am now.”

Here he is. Erick All is in Ann Arbor, Michigan playing as a team captain for the Wolverines.

In December of 2021, it was brought to the attention of the man that saved Erick, Tom Broyles, that the infant he saved was a star for the Wolverines after he saw his touchdown catch against Iowa in nearby Lucas Oil Stadium in Indianapolis.

21 years after that unforgettable day in their first quick meeting, Broyles and All were able to meet again after the home opener against Colorado State.

“It was just a really cool thing, you know,” Broyles said. “Even if he wasn’t a really great football player, still, what a great outcome for, you know, you know, for him having the life that he’s had.”

Now, Erick isn’t glad to be playing football but to just be breathing.

“It’s a blessing that I’m still here,” Erick said. “And without him I wouldn’t be.”

The same day Erick met Tom. His girlfriend also gave birth to his first son, Houston. It turned out to be a very special day.

►Make it easy to keep up to date with more stories like this. Download the 13 ON YOUR SIDE app now.