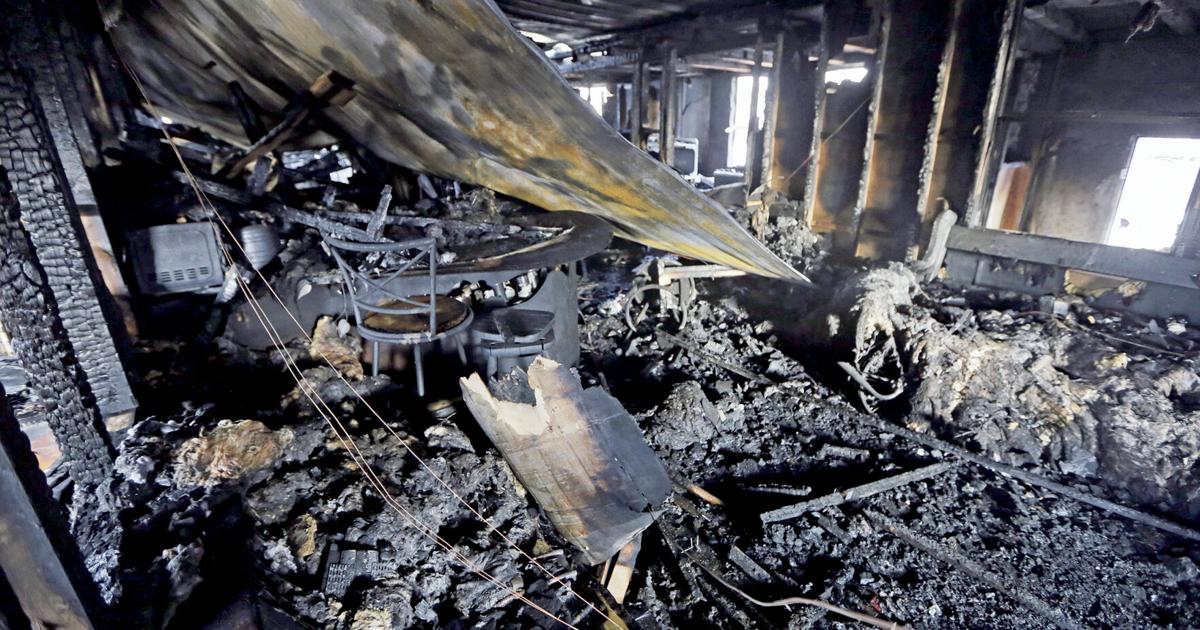 There was no escape for two girls who died in December from smoke inhalation in a Chimayó home engulfed in flames, investigators found.

Firefighters had to force their way through a makeshift wall of the mobile home in their attempt to rescue Elliana Martinez and Aaleah Carbajal from a back bathroom that was locked from the inside, the State Fire Marshal’s Office says in a report released Wednesday through a public records request.

The firefighters’ efforts were unsuccessful. The girls were taken to Christus St. Vincent Regional Medical Center, where they succumbed to their injuries. Elliana was 14, according to the report. It does not list an age for Aaleah, but an obituary said she was 9 — almost 10 — at the time of her death.

The sobering report, which follows a monthslong investigation into the early morning Dec. 4 fire on Plaza del Cerro, in a historic neighborhood near El Santuario de Chimayó, says the windows of the bathroom were boarded with chicken wire.

Along with clothing and blankets, investigators found pornographic magazines and drug paraphernalia in the small room.

The girls appeared to be living in the bathroom and sleeping “on the floor next to cabinets and a toilet,” the report says.

It notes the cause of the fire could not be determined.

Investigators also found no sign the girls had tried to flee from the burning home, and “it appears there was no rescue attempt by the immediate family as firefighters stated they were standing on the outside watching the fire” when crews arrived.

Elliana’s father, 35-year-old Jacob Martinez, acknowledged he safely escaped the home with Kristy Martinez — his girlfriend at the time and Aaleah’s mother. But he disputed the report’s assertion he made no effort to save the girls and several other details in the document.

Kristy Martinez woke him early in the morning, alerting him the home was on fire, he said in an interview Wednesday evening. He said tried to get to the room where the girls were sleeping.

“I was calling them, and the roof caved in on me,” he said. “All I saw was red flames coming down from the roof.”

The girls were not living in the bathroom, he said, but often used a walk-in closet there as what he described as a “clubhouse.”

The windows were covered in chicken wire because they were being plastered over, he added.

Once he got outside, Martinez said, he began breaking windows to find a way back in to rescue the girls. Smoke pouring out of one window pushed him back.

A Santa Fe County sheriff’s deputy carrying a fire extinguisher pushed him back farther, he added.

“They said, ‘Stay back!’ So I couldn’t get nowhere near the house,” Martinez said.

While the report of the investigation described the residence as a double-wide mobile home, Martinez said it was a single-wide with additions.

Previous reports said Elliana’s 4-year-old sister also fled the home with the adults, but that child is not mentioned in the report by the State Fire Marshal’s Office.

Kristy Martinez could not be reached for comment Wednesday.

She told The New Mexican during a December vigil for the girls at the nearby santuario she had helped raise Elliana since she was 4. She described her granddaughter as “innocent and sweet.”

“She loved to sing; she sang from the heart,” Eleanor Martinez said.

It remains unclear whether Jacob Martinez or Kristy Martinez will face criminal charges tied to the fatal fire. The State Fire Marshal’s report was turned over to the Santa Fe County Sheriff’s Office for review and a possible investigation.

Juan Ríos, a spokesman for the sheriff’s office, said the agency also is awaiting reports on the incident from the state Children, Youth and Families Department before deciding whether to take action

Rob Johnson, a spokesman for the child welfare agency, said CYFD officials are investigating the fire, but he declined to comment further.

The New Mexico Attorney General’s Office is not yet investigating the incident, spokeswoman Jerri Mares wrote in an email. “Our office has not received a referral or a report from the primary investigating agency; however, we are contacting oversight agencies to verify the lead agency,” she wrote.

The state fire marshal’s report says investigators determined the blaze ignited in the middle of the home where the kitchen and a center bedroom were located.

The roof collapsed in that section of the home, which also sustained severe fire damage.

Investigators ruled out the possibility of a gas leak but said they could not rule out an electrical problem because the wiring of the main power line underneath the residence “looked improperly installed … or not wired to standards,” according to the report.

The report adds investigators looking into the area of the fire’s origin noted the “electrical within this area appeared not to be installed according to code and-or didn’t have a qualified professional install and-or conduct proper work and-or maintenance.”

While investigators were unable to determine a single cause of the fire, they wrote they could not rule out the possibility the fire started from “smoking of cigarettes and or narcotics … or any other open flame device.”

Jacob Martinez said he was unaware of faulty electrical wiring in the home but said, “It’s an old house. My grandpa built it before I was born.”

Santa Fe County firefighters stationed in Pojoaque received an alert about the fire around 4:30 a.m. Dec. 4. Firefighters from La Puebla and Chimayó were already at the scene.

A fire lieutenant interviewed by investigators said the structure was still standing when firefighters arrived, though flames were rising. Emergency responders had been alerted there were were still two people inside, he said, according to the report, but “firefighters and law enforcement were unable to gain entry at that time and were uncertain where the children were located within the house.”

Firefighters who first arrived at the scene encountered a man and woman in the driveway, who were later identified as the girls’ parents, the report says. It does not name Jacob Martinez or Kristy Martinez.

The man “was wrapped in a blanket and displayed no sign of emotion or concern for his children,” the report says. “His priority was that the structure was burning.”

When firefighters asked the woman where the children were, she told them the girls were “in the back bedroom.” As firefighters tried to enter the home through boarded windows to save the girls, the report says, the father told them, “House is on fire; let’s get the fire out.”

The boarded-up windows were so difficult to break through that a New Mexico State Police officer requested an ax, the report says.

The fire “consumed the area” around the children, “sending toxic deadly smoke into the very confined space leading to their deaths.”

Firefighters found the girls, who were unresponsive, lying on the bathroom floor.

Fire marshal’s investigators note there were several heroin needles strewn on the ground around the charred property after the fire.

Jacob Martinez said he has never used drugs but alleged Kristy Martinez has.

One firefighter interviewed during the investigation said the Santa Fe County Fire Department had responded to a report of a drug overdose at the residence about a month and a half before the blaze.

At that time, the report says, the firefighter witnessed a man “freaking out and beating a tree trunk with his fists.”