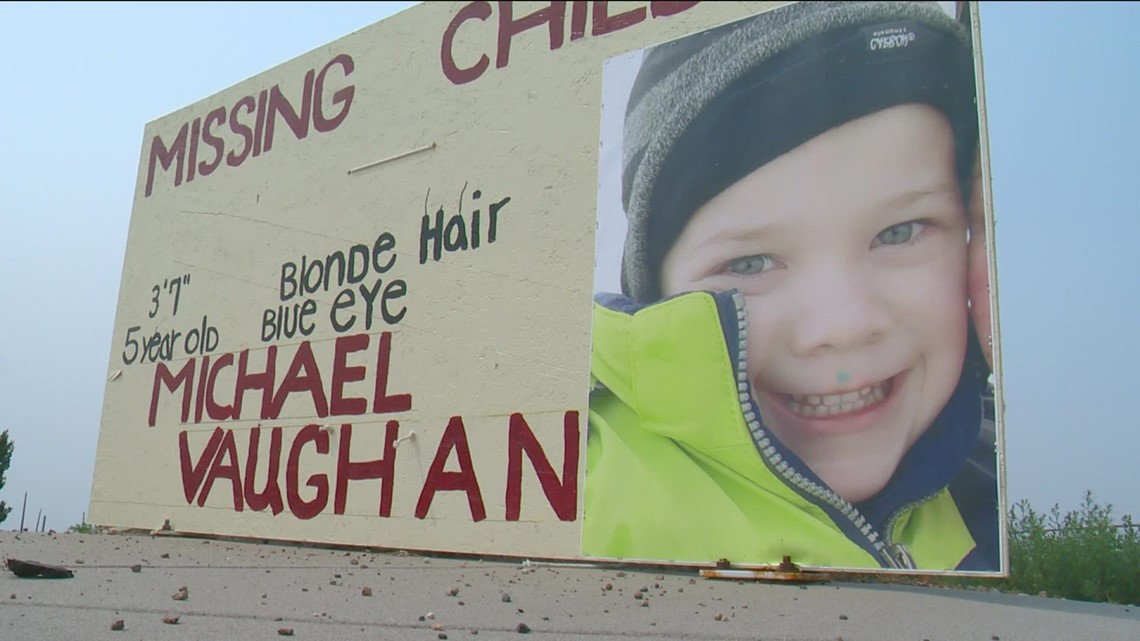 Michael Vaughan’s parents believe the things investigators are working on at the moment will lead to his discovery.

BOISE, Idaho — It’s been an entire year since Michael Vaughan went missing from his neighborhood in Fruitland, and every day since, his parents struggle to get out of bed. But, they do it for Michael, and the hope of his return.

Hope comes from their hearts, said Tyler Vaughan, Michael Vaughan’s father. Every day when he doesn’t want to get out of bed, he and Michael’s mother Brandi Neal do it anyway to keep their family together.

“It was a very quick year,” Tyler Vaughan said with a pause. “And… a long year at the same time. Time is a weird thing.”

They can’t give up, he said, so hope is something they latch on to in order to maintain that their son will be home someday. Hope looks like strength, Brandi Neal said.

“None of us are going to stop. Not a single one of us will stop. Michael is going to come home,” she said.

Recently, the work investigators have done are leading the family to believe that Michael will come home someday, they said.

That night, Brandi Neal was working her shift at the local Albertson’s grocery store. Tyler Vaughan was home with Michael and his other children, along with a daughter who they nicknamed “Buggy.”

“I went back to change Bug, Michael was playing on his (Nintendo) Switch, she was sleeping, so it took a minute for me to rouse her. I changed her diaper and ordered pizza, probably took me about 15 minutes maybe,” Vaughan said. “I went outside to smoke and Monkey wasn’t outside, so I figured he was inside with his brother.”

Tyler Vaughan said that once he realized Michael wasn’t inside, he started to panic.

“I came outside and I looked down the street. I hopped in the car and called Brandi, and I drove to the splash pad, and then all over the neighborhood walking, running, driving. Like, I couldn’t tell you where. I mean, I didn’t leave the neighborhood, but all up and down,” Vaughan said.

He said he called Brandi in a frenzy because he needed her home as fast as she could get there.

“I was scared. She was the first person I thought to call,” he said. “I was panicked, I was out of my mind.”

“He’s a wonderful, wonderful little boy, and he doesn’t deserve this,” Vaughan said.

Neal said that her daughter, Bug, will prop Michael’s picture up with her while she watches TV. “She still doesn’t understand quite where Michael went”, Neal said.

Both parents feel Michael was taken, but whether that is by a stranger or someone close to the family, they don’t know.

The driver of a white Honda Pilot seen around the area during the time of Michael’s disappearance has not been identified, but police believe this is a resident. Additionally, they are looking for a man who was seen walking around the park in Michael’s neighborhood that evening.

They are asking to speak with both the driver and the man walking through the park to see if they saw anything that could lead to the discovery of the young boy.

Law enforcement said in a press conference on Friday that they have been looking into both strangers and family friends as persons of interest and that nothing is off the table. However, a year later there are still no suspects.

Some people that have been searched and interviewed have also been uncooperative, Fruitland Police Chief J.D Huff said.

Brandi Neal and Tyler Vaughan both said that they have been cooperating with police, and police have publicly confirmed this. However, they have not cleared the two since so many parts of the case are “outstanding” and “not absolute.

“We are working with law enforcement,100%. And I will say that they are a very, very big part of our lives continuously. We will continue to work with them, 110%. So when everything is cleared, when they’re ready to take that step we’ll be grateful, but we know it takes time,” Neal said.

Tyler Vaughan and Brandi Neal agreed that they completely trust the work that the police are doing for their son’s case. Police want him home as much as the family does, they told KTVB.

Some speculative theories that have been thrown around on social media have convoluted investigation in the case since they are not credible tips, Huff told KTVB, and the Vaughan family is no stranger to the public interest all over the internet.

In a phone call on Friday with Huff, he confirmed to KTVB that harassment, involving oneself in an ongoing investigation and contacting law enforcement with random theories divert attention away from finding Michael and further muddy the waters to investigate real tips.

“Most of the theories I think are completely not grounded in reality for the most part,” Vaughan said.

Huff said he wants to be clear that he encourages submitted tips to law enforcement, and if someone has a small piece of information, they should come forward.

With the lack of information released over the last year, Huff told media in a press conference Friday that they don’t want to compromise the case by releasing anything vital about the investigation to the public. Tyler Vaughan said that there are things the police do not release to the family either, and they are OK with that.

They also know information that has not been released to the public. The parents are keeping this information close to their chests in hope that investigators will turn it into Michael’s discovery.

Brandi Neal said she continues to support law enforcement in their efforts because they are finding the truth and will not stop until they find her son and bring him home.

She and Tyler Vaughan told KTVB that they are begging anyone who is out there that knows something to have the courage and the heart to come forward.

Authorities continue to encourage people to share this poster about Michael hosted by the Idaho Missing Persons Clearinghouse.

As of late June, the reward for Michael’s safe return stood at more than $52,000.

Fruitland Police are working with the FBI and Idaho State Police as well as search and rescue organizations.

Anyone with information is asked to contact the Fruitland Police Department at 208-642-6006, extension 0, or email the department’s tip line at findmichael@fruitland.org.