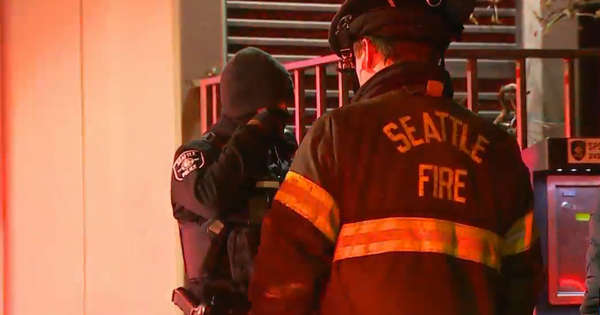 Assaults, threats, and slurs are just some of the problems firefighters are facing when they show up to help on the streets around the city. The number of reported incidents has shot way up this year and it’s got first responders pleading for solutions from city leaders.

Documents obtained by KOMO News detail the range of crimes and other offenses directed at fire crews while on the job. The data the city released is disturbing.

Seattle firefighters have been struck by rocks and bottles, chased by people with knives, or punched and kicked, according to the reports, and each time it’s while they are trying to help others.

“I think for me it’s a job that is very honorable. They do a lot for the communities,” said Anton Easterbrook, who was passing a scene on Wednesday where firefighters were containing a potential hazardous materials incident. “They put a lot on the line to save others and it’s a lot of responsibility.”

Many see firefighters as essential and regard them as highly trained crews who are ready to take big risks to protect people and property. That’s why it can be hard to understand why verbal and physical assaults appear to be on the rise against Seattle firefighters.

Some of the cases this year have led to criminal charges.

“It’s concerning that firefighters have to face this and we want to send a message loud and clear that if you assault a firefighter, you’re going to get a felony charge any time that we can prove that,” said Casey McNerthney, a spokesperson for the King County Prosecuting Attorney’s Office.

KOMO News is tracking these incidents and received detailed data through a public records request. It shows 80 reports of verbal or physical altercations so far this year.

That compares to 14 reports last year, and 17 in 2020. However, some of the increase could be tied to better reporting by fire crews and improved record keeping by the department.

“It angers me,” said Andrew Royer, when a reporter told him about the trend. “One of my good buddies is a firefighter out in Colorado. I think about him, and the men and women who serve in the city of Seattle.”

The data shows that just this year, 12 firefighters said they were pushed or pelted with rocks, bottles, or trash. Another seven were punched and four others spat on. The fire department compiled 38 reports of crews being threatened with violence and 44 more reports where firefighters were subjected to insults, slurs, or hate speech.

“Every time that we’ve had a case that we can prove we’ve charged it immediately and we’re going to keep doing that because firefighters should feel safe on the job and know that prosecutors have their back,” McNerthney said.

A firefighter who has been tracking these troubles said all the recent media attention has got city leaders listening. Much of the data is being analyzed by the Seattle City Attorney’s Office to come up with solutions that keep firefighters safe so they can help the rest of the community.

“Encountering combative patients or bystanders on emergency responses has unfortunately become a reality for our firefighter/EMTs and paramedics. Our members take an oath to protect the community through fire suppression and responding to medical emergencies, but now also have to be prepared for the possibility that they could be threatened verbally or physically while in response. A few years ago, with funding from the Seattle Fire Foundation, the department purchased ballistic gear for all on-duty personnel which is now worn in response to scenes of violence. And earlier this year, in collaboration with Local 27, we developed a new method for tracking assaults and threatening behavior experienced by our members in the field. This information is shared with the department’s Joint Safety Committee, which exists to enhance firefighter safety, and with City leadership including the Seattle Police Department, Prosecuting Attorney’s Office, Mayor’s Office, and Council. The health and safety of our firefighter/EMTs and paramedics remain paramount, and we will continue to look for ways to work internally and with partner agencies to improve their safety while at work.”