SHREVEPORT, La. (KSLA) – A billowing cloud of black smoke could be seen near I-49 in Shreveport Friday morning.

On Friday, Oct. 14, about 10 minutes before 11 a.m., more than 30 units of the Shreveport Fire Department responded to a large fire in the area.

Chief Clarence Reese with SFD says the 2-alarm fire was located in the 1900 block of Sestin Street. It was initially called in as a dumpster fire at a trucking company; the owner of the company was the one who called.

Since there was old oil in some of the tanker trucks, Chief Reese says the Louisiana State Police and the Louisiana Department of Environmental Quality were contacted. The fire was mostly under control around 12:10 p.m. Crews will remain on the scene to monitor potential hot spots, the chief says.

A couple of vehicles were lost to the fire, but no injuries were reported.

Two company employees were on-scene when the fire started. They will be interviewed as part of the investigation. 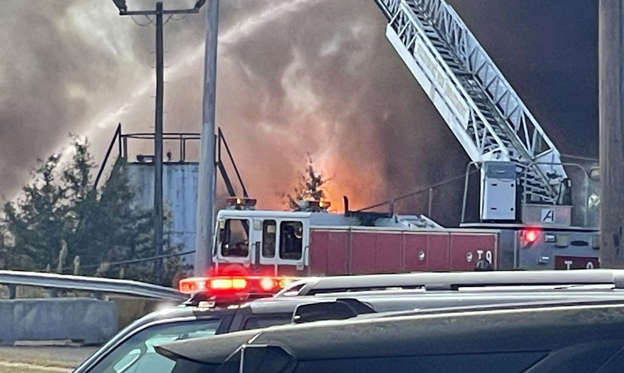 The chief says firefighters took a “surround and drown” approach to fighting such a large fire. He also says the city’s water department increased water pressure in the area to help them put out the blaze.

Some explosions were reported during the fire. The chief says that’s not surprising considering the heat of the fire and the location.

Crews rotated on the scene for approximately 6 hours. In the time of rotating crews, approximately 100 firefighters were a part of putting out this fire to save life and other property.